Image
Once seemingly blind and deaf as a kitten, Siamese thrives at the Sanctuary.
By  Christelle L. Del Prete 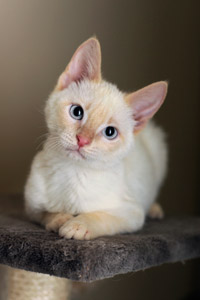 The first thing you’ll notice about Sinatra, who lives in Morgaine’s, a building in Cat World, is how tiny he is. You’ll also notice how adorable he is; Sinatra is an irresistibly cute flame point Siamese kitten. His soft fur is a rich cream color, with darker orange markings, and his white whiskers are so short they are barely there. His ears are way too big for his head (endearingly so), and his clear, pale blue eyes will pull you in. But what’s really amazing about those ears and eyes is how well they work – because they used to not work at all.

Sinatra was born last August, probably prematurely, and his low birth weight, coupled with malnutrition, caused him to be developmentally delayed. In fact, the Good Samaritan who found Sinatra, and began caring for him, thought he was blind and deaf, and had neurological problems. In addition to being underweight, he didn’t seem to respond normally to movement or to sounds, and he had a very pronounced wobble in his walk – much like cats with cerebellar hypoplasia.

Here at the Sanctuary, however, where caregivers like Cassie Rowell have plenty of experience caring for special-needs animals, Sinatra is really thriving. As soon as he began getting proper nutrition and love, his hearing, eyesight and motor skills began to improve drastically. In fact, Cassie says, “He doesn’t really exhibit those signs (of blindness or deafness) at all.”

It’s really just the opposite: There are clear signs that Sinatra can see and hear just fine. Cassie says that when she clicks her nails on one side of her body, the little kitten will come around to that side to see what the noise is. And, when he’s in his room and sees her through the window of the door, he rolls over as if to ask her to come inside and give him a belly rub. 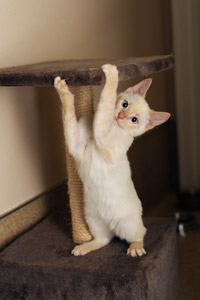 Though he is still very skinny, he is putting on weight, and although his back legs are still a little shaky, it doesn’t slow him down at all. He runs around and plays like any normal kitten. He especially loves playing with shoelaces, and can untie them very quickly. Best of all, the little kitten is super lovey. He’s happy to hang out on your lap, or to snuggle, and, if he asks to get down, he’ll turn around and want to climb right back up again. One thing is for sure: Sinatra may be a late bloomer, but he’s getting very close to full bloom.