Image
Sharon Discorfano, a recent law school graduate, rewards herself with a visit to Best Friends and commits to being an advocate and voice for animals.
By Jennifer Hayes

Ever celebrate a significant accomplishment? Did you give yourself a gold star, treat yourself to a fabulous meal, or perhaps host a self-congratulatory party?

After graduating from law school, Sharon Discorfano visited Best Friends Animal Sanctuary. Given her animal advocacy, her choice should come as no surprise.

Ever since Sharon "adopted" Cannonball the whale with two bubblegum proofs of purchase and a dollar when she was 10 years old, she has worked to make the world a better place for animals. But as an adult, it was the adoption of her first dog, Pushkin, that led her on the path as a cruelty-free advocate. 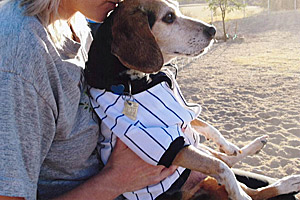 Although details of the first two years of Pushkin's life are uncertain, it's a possibility that he was a rescued laboratory beagle. Since Sharon was already a vegetarian, she thought the next sensible step would be to only purchase products not tested on animals. Two all-night research sessions resulted in cruelty-free replacements throughout her house. Since she's a writer by trade, she launched a Cruelty-Free Favorites blog to help others in their own day-to-day choices.

Most folks select the latest novel for summer reading. Not animal advocate Sharon. In 2008, she purchased an animal law book. Roughly 150 pages in, she decided to attend law school and began writing a second blog about animals and the law.

Grief inspired a third web project. Following the loss of her beloved Pushkin in 2009, Sharon spent the period of Lent writing a daily letter to her dog to ease her heartache. Initially meant to be private, she decided to share her pain in an effort to help others. Sharon and her husband, Seth, created a website where people could write a letter to their departed pets. Letters to Pushkin helped the couple heal from their loss together, while allowing visitors to share their sorrow and memories. Hundreds have found solace by contributing their own letters.

"Creating a website that could help other people in their own healing process - that's the best tribute I could give to Pushkin," says Sharon. "It's also an amazing, constantly growing testament to all kinds of animals, and how a companion animal is an integral part of the family." 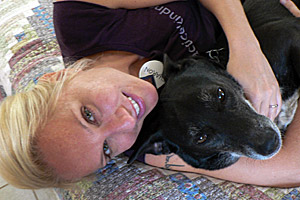 Commencement means both an end and a beginning, which is exactly how Sharon felt about graduating from law school. To mark the occasion in a special way, she and her husband volunteered at Best Friends.

The experience is one she will always remember, and she blogged about several of her favorite memories. They include the Angels Rest annual blessing, a sleepover with Harpo the dog, and a greeting from King O the cockatoo, who repeatedly welcomed her with a chorus of hellos. However, it was the essence of Best Friends that impressed her. Sharon believes the Sanctuary to be a crossroad, a spiritual place where people connect to the bigger picture.

"The scenery alone is so beautiful," she says. "It's really like a slice of heaven where you feel this benevolence enveloping you. The setting mirrors exactly what's happening on site. Everybody's motivated by compassion and a sense of connectedness, not just with animals, but essentially with each other."

A voice for the animals 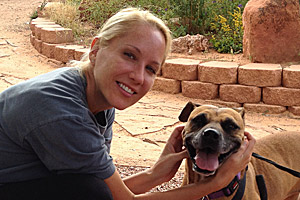 Reinvigorated since her trip, Sharon has expanded her animal advocacy. She will soon publish a vegan cookbook and launch a website focused on canine and feline epilepsy.

Sharon welcomes all opportunities to be a voice for the animals: "There are so many positive changes happening on behalf of animals, thanks to the work of people like those working for Best Friends. But there are days when it's easy to feel overwhelmed by how far we still have to go. And, on those days, you think of a place like Best Friends and your faith is renewed. The Sanctuary is a little oasis, but it's a microcosm of what the world can be."