Image
Handsome senior black-and-white cat, who had been hit by a car and left incontinent, is adopted by a woman who falls in love with him at first sight.
By Christelle L. Del Prete 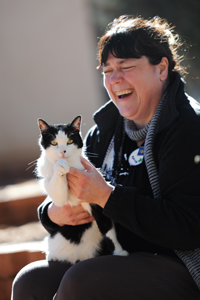 On his last day at the Sanctuary, Bob the cat sat on a picnic table, basking in the warm midday sun. Beside him was a cake with a message that read: “Congratulations!” However, he was more interested in a can of Fancy Feast, and he didn’t see what all the fuss was about — yet.

Bob, a Cat World legend, was about to go home. The handsome black-and-white cat, who’d recently turned 14, came to the Sanctuary nine years ago after a serious accident. He’d been hit by a car, which left him incontinent. Because he could no longer urinate on his own, it became necessary for Bob to have his bladder expressed three times a day for the rest of his life. That meant he needed to find a very special home with someone willing and able to accommodate his very special needs.

A cat who loves rides and leash walks

It would be challenging to find the perfect home for Bob, but caregivers at the Sanctuary were determined to make his life as wonderful as possible while he waited for it. Bob loves golf cart rides, and he often went cruising with his caregivers. But his very favorite thing to do was to cruise along on foot. He was one of the first cats in Cat World to truly take to harness and leash walks.

Over the years, Bob took many volunteers for walks and established a routine of “trick-or-treating” at the various buildings in Cat World. "Every day is Halloween for Bob," his caregivers agreed. He’d walk up to each building, meow at the door, then sit and wait for someone to open it and give him a treat.

Bob loved his daily routine. But although he was happy at the Sanctuary and enjoyed being a Cat World mascot, he deserved a home of his own in which to spend his golden years. And, although his adoption would take months to complete, someone was in love with him and wanted to bring him home.

In 2012, Monica Popov Kirchner was at the Sanctuary to attend Best Friends’ How to Start and Run an Animal Sanctuary workshop. While she was visiting Cat World, Monica felt a pair of paws on her shoulders. It was Bob, and it was love at first sight. “He is just the coolest cat, and very human-like,” Monica says.

Monica was unable at that time to take Bob home because she had special-needs cats of her own, and she didn’t know how to care for his unique needs. So she did the next best thing. She came back to the Sanctuary to visit Bob as often as she could and, when a space opened up in the Kirchner household, she started learning how to take care of him.

Settling in with his new family in Texas 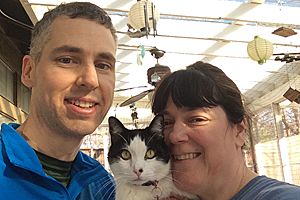 As soon as she mastered the skills to keep Bob healthy and comfortable, it was official. Bob would be riding off into the Texas sunset with Monica and her husband — but not without a proper sendoff party, with caregivers from all over Cat World bidding their beloved Bob farewell and wishing him luck in his new life. Then, Monica took him for one last trick-or-treating run.

Now settled in with his new family, Bob is making friends with his feline siblings. He loves napping with his new grandmother, with whom he shares a special bond. But it’s clear he’s also continuing his legacy, which began at Best Friends. “He can be in the deepest sleep on my mom's lap and if you make the slightest movement of his leash, he is wide awake and ready to go. He loves his walks!” Monica says.

To help more animals like Bob go from homeless to home, become a Best Friends member.

Photos by Molly Wald and courtesy of Monica Popov Kirchner