To say that Seppi is a special bird is an understatement. During the time the salmon-crested cockatoo lived at Best Friends, he became an ambassador of Parrot Garden and a legendary presence at the Sanctuary. And after making an unforgettable impression on everyone he met during his time at Best Friends, our legend has landed the perfect home.

A level above his salmon-crested cockatoo peers

What made Seppi so special?  His personality is larger than life, even by Cockatoo standards. Cockatoos are known for their strong, bold personalities, they’re very vocal and they can be quick to change their minds. “In the wild, cockatoos are never alone,” says Jacque Johnson, Parrot Garden manager. “So they expect their people to be with them all the time.”

Without enough to do, the birds can become demanding and destructive. And Seppi? He’s a level above most of his cockatoo peers. A born ham, he wants to entertain people (and to be entertained) constantly. He’s smart as a whip and always wants to be out and about. He’s not the kind of bird who would be content to live a quiet life. In fact, before he came to Best Friends, he got bored in his previous home and creatively “redesigned” an antique dining room table.

A bird about town

Sanctuary life agreed with Seppi, because there was always something exciting happening. He “helped” with Parrot Garden construction projects. He loved watching the maintenance crew as they built flight enclosures and when they put the finishing touches (including his footprints) on the new clinic.

He was a regular in the Sanctuary lunchroom and Best Friends Welcome Center, and would pose for pictures on the arm of anyone who stopped by. Nearly a whole generation of children in the nearby town of Kanab, Utah, met the sassy Moluccan parrot, either on a field trip to Best Friends or in a classroom.

Seppi was the go-to bird for events because he was such a showoff and a clown. He was the classic life of every party, but the qualities that made Seppi so incredible are what made it so hard for him to find the right home. 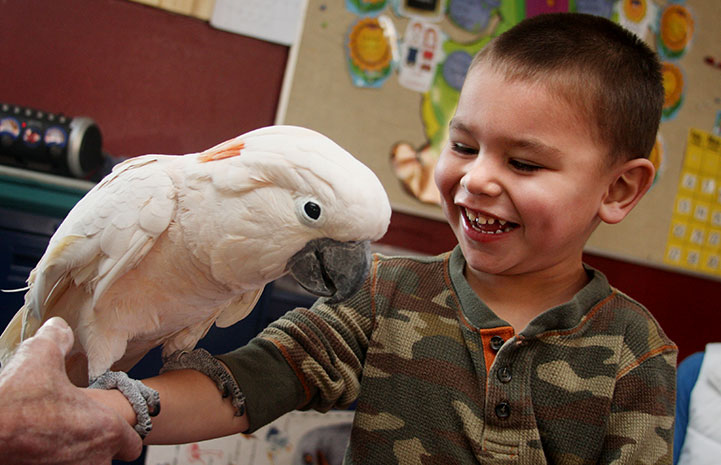 The perfect match for a Moluccan cockatoo

When they are matched with people successfully, Moluccan cockatoos can make amazing companions. All Seppi needed was to find a family who had plenty of time to spend with him and let him be the star of the show.

During the years he lived at Parrot Garden, lots of people were drawn to the personable pink cockatoo, but it was never the right fit. All that changed this past August when a couple came to the Sanctuary to adopt a bird. No one expected Seppi would be that bird, but the fact that he captured their hearts right away was no surprise. This time, though, it was different.

Things to consider before adopting a parrot

Caregiver Stacie Cornbleth says she got the chills when she heard that a couple was interested in adopting Seppi. “I knew they would be perfect,” she says. “That’s the first time that’s happened in the six years I’ve been here. I've never felt so good about an adoption.”

What made Seppi’s new people so perfect? Well, Seppi’s new mom works from home, so he will be able to be out of the cage all of the time. Best of all, the family has a therapeutic horse program on their ranch that helps veterans with PTSD and children with autism. That means that Seppi will be able to continue to do what he has always loved — stealing the show while he entertains and educates people. 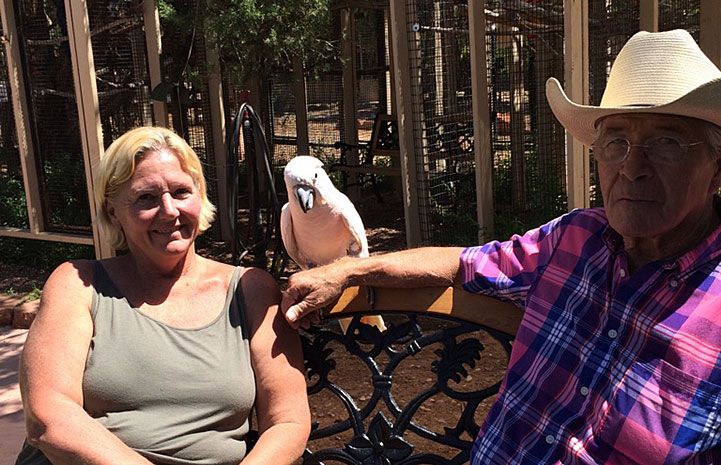 These days, Seppi has a special safety enclosure for him in the middle of the ranch, so he can stretch his wings while he’s hanging out on center stage. Chad, his new mom, says that he makes her and her husband laugh out loud every day, and that Seppi’s new dad has had more conversations with Seppi than he’s had in years.

Seppi couldn’t be happier with his new life. The Moluccan bird is already well on his way to becoming a legend again. Even though he’s very much missed by everyone at the Sanctuary, the tears of his caregivers are tears of joy. It couldn’t have been a more perfect adoption, and it couldn’t have happened to a more deserving bird.

Help more animals like Seppi go from homeless to home 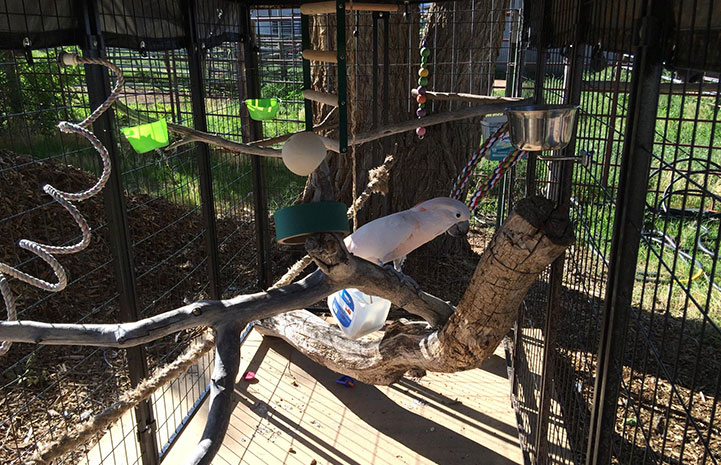