Families step up to foster senior dogs Enzo and Harvey Milkbone, both a little quirky and both utterly lovable.
By Nicole Hamilton

Allow us to introduce you to Enzo and Harvey Milkbone ― two senior pit bull terriers who are true birds of a feather. When they arrived at Best Friends in Los Angeles, not only were they a bit older, but they also had some major personality quirks, some of them endearing and others needing a bit of fine turning.

Both Enzo and Harvey Milkbone also have some mobility issues, and while they love meeting new people, they had a tough time when it came to meeting new dogs. But these two guys are more than their challenges (a lot more). They’re also enormously loving and fun, loyal and kind, and now they’ve got something else in common: They’re both flourishing in foster homes with families that couldn’t wait to share their domiciles with a big, senior dog. 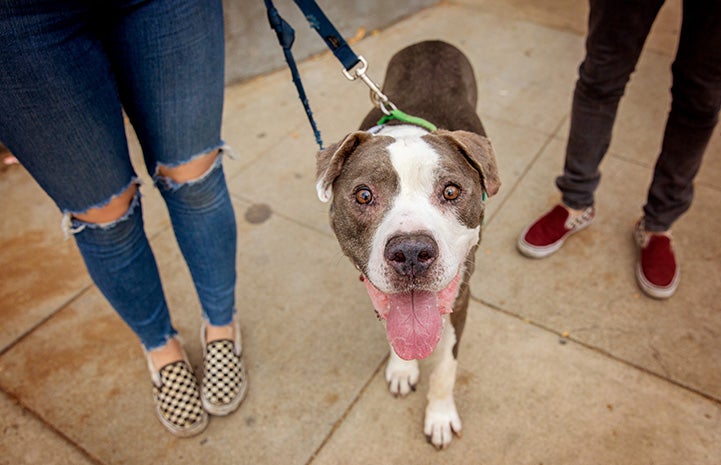 When Enzo first came to the Best Friends Lifesaving Center in Los Angeles, he tended to stop walking when it was time to return to his kennel. Sometimes he’d sit and not budge, while other times he’d glue himself to the ground ― an act sometimes called “pancaking.”

In time, Enzo’s stubborn refusal to return to his kennel got a lot better, but not his mobility issues. In fact, he often had to be taken to the play yard or walked around the block in a stroller. It was also getting harder for him feel comfy in his kennel. What Enzo needed was a foster home where he could have plenty of room to rest his achy joints.

Across town, Rachel Gonzalez and Barry Vanderable were considering helping a homeless dog, since the family was working and attending school from home during the coronavirus. So, they contacted Best Friends and soon after, they began fostering Enzo. 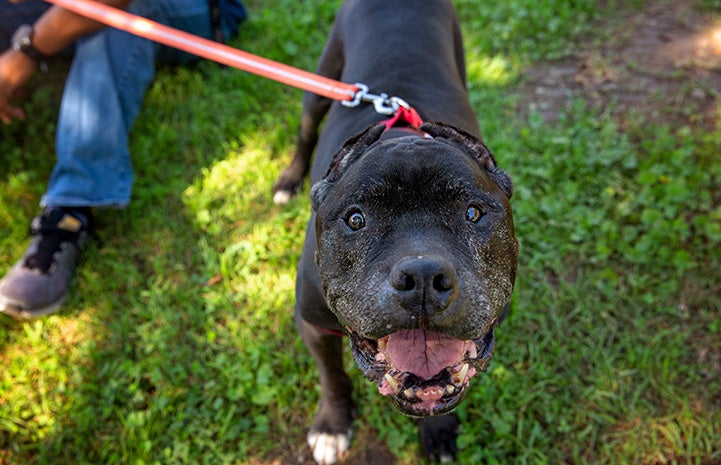 To make sure he was comfortable, Rachel and Barry bought Enzo all the things they thought he’d like ― from treats to a fluffy dog bed, which he warmed up to right away. In fact, now if they stay up past his bedtime, he takes himself to bed.

Thanks to all the information and guidance they received from the team at Best Friends, they were also prepared for his quirks, including his penchant for stopping on walks. As a result, their walks with Enzo these days are more a breeze than a burden.

“We learned pretty quickly that when he is interested in something, he perks right up,” says Rachel, who adds that the longer exploratory walks are now limited to weekends. “I give him a lot of time to smell things and look around. I’m mindful that his curiosity is always greater than his energy.” 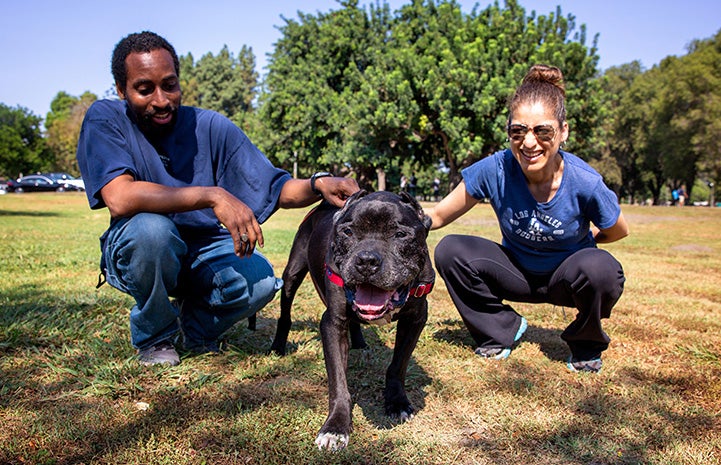 Now Enzo loves being around people. “He’ll take a short nap and then move on to see what the next person is up to,” says Rachel, who is getting used to finding him close by when she’s cooking or washing dishes.

Often, you can find him outside, lying in the sun, although he’ll pause his sunbathing if he sees someone on the front porch. “Enzo is a people person, for sure,” says Rachel.

[Senior dog finds a home for his “100th” birthday] 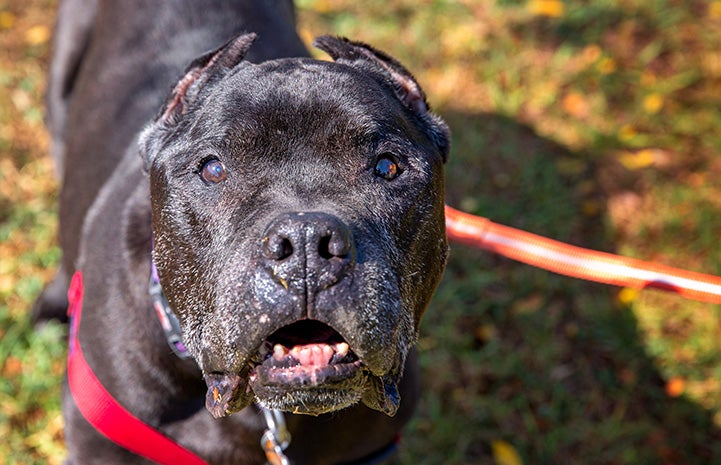 When Madison and Matt Rohde started fostering Harvey Milkbone they were prepared to help him with his mobility issues and his tendency to get overwhelmed with excitement around other dogs. What they weren’t quite prepared for was the size of the senior pittie’s personality.

“When he finally started opening up to us, I was shocked that a dog could have a personality as big as Harvey’s,” says Madison. “You can really tell what is on his mind at all hours of the day. When I take him out for his walks, people notice it, too.” 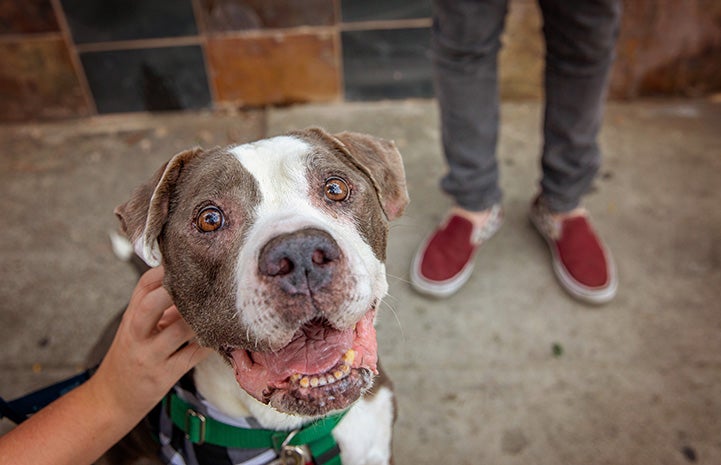 At Best Friends, Harvey tended to cock his head to one side when people passed, looking at them as if to say, “OK, where are we going?”

Kennel life was getting hard for Harvey. “Living on concrete, despite lining his kennel in bedding, made it challenging for Harvey to lay and get around comfortably,” says Amanda Yocom, dog behavior specialist. “Adding the barking dogs and visual access to other dogs, Harvey would get reactive and overwhelmed, which is no life for a sweet senior dog.”

What Harvey needed was a foster home. When Madison decided to foster a dog for the first time to have some company while Matt, an essential worker, worked long hours during the pandemic, she chose Harvey.

It took a couple of weeks for him to feel fully comfortable at home with Madison and Matt, but once they got a routine in place for him, his confidence grew. The key, says Madison, was letting Harvey figure out his surroundings at his own pace, although she admits the first few days tested her patience. “I couldn’t understand why he wasn’t automatically happy here. I thought it was my fault,” she says. 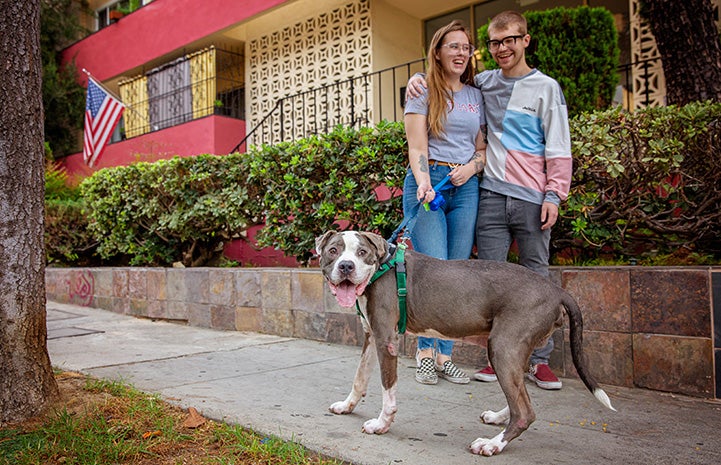 A little time, research and encouragement from Matt helped put things in perspective, and by that time, Harvey had begun to find his stride. Today, he’s a total lovebug and a fast learner to boot, so they’re always teaching him new tricks.

Madison is learning things from Harvey, too, like the importance of having patience and being understanding when you’re fostering dogs. “As a first-time foster, I wasn’t sure what to expect when bringing Harvey home,” she says. “All I knew is I wanted to give him all the love and attention he deserves.”

Now Madison encourages others to foster older dogs, too. “Senior dogs may take a little extra time and support, but the love you receive from them is like no other.” 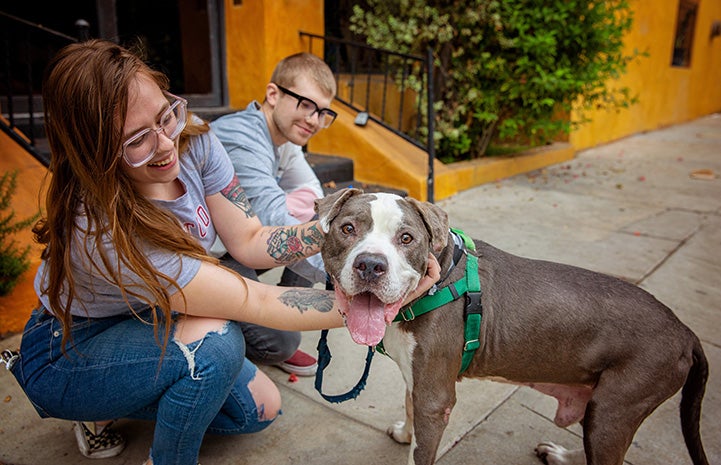 Can you spare a room for a senior dog?

One of the best things about fostering senior dogs is that when it comes to living in a home, they already know the ropes, so you can focus on the fun stuff.