Life is brighter for this Chihuahua mix

Image
Story of a senior Chihuahua with medical issues (cataracts, skin infection, luxating patellas) from a hoarding case who is adopted and living happily.
By Nicole Hamilton

It may have taken years, but Polar Bear finally knows what it’s like to feel the sun on his face. These days, this Chihuahua mix loves nothing more than lounging in the backyard of his home, where he soaks up the Atlanta sunshine.

This may not be a big deal for most of us, but it is for Polar Bear, who spent most of his life indoors as one of many dogs living together in an overcrowded house. But this was before Polar Bear made his way to Best Friends–Atlanta where he met a couple who saw he needed a special home where he could spend his days as a senior in comfort. With a little care and attention, they knew they could make Polar Bear’s golden years his best years. 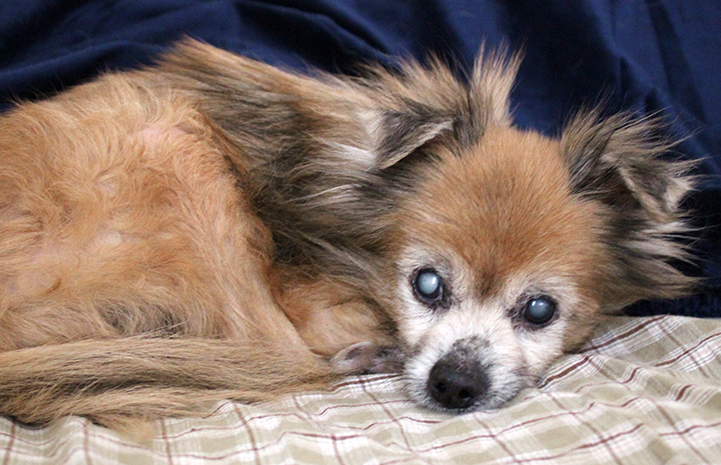 Help for a special-needs Chihuahua mix

Polar Bear came to Best Friends–Atlanta from a rescue group, where he and several other small dogs ended up. They had been found at a property where they were kept indoors in close quarters and their health needs were neglected. 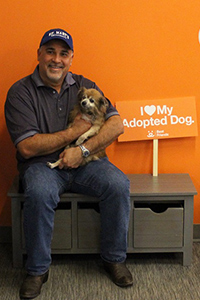 Like the other dogs from the property, it was clear that Polar Bear had multiple medical issues. For starters, cataracts caused him to become partially blind. He also had a skin infection that made him nearly hairless. And he also sometimes had trouble walking because of his luxating patellas, a joint problem that makes his knee caps to go out of socket.

The rescue group reached out to Best Friends-Atlanta for help. Soon Polar Bear was in a new foster home and on the road to recovery and a new home.

Word spreads fast on social media, especially if it’s news about a sweet senior Chihuahua mix who would make a perfect companion to anyone with a lap to spare. Polar Bear is a happy dog who is young at heart, and he gets along great with other pets ― probably because he’s used to living with so many.

Polar Bear’s sweet face turned up on Best Friends–Atlanta’s Facebook page, and it immediately captured the attention of Kathy and Joe Alvarez, a couple with a soft spot (and sweet pad) for senior dogs. “They are so appreciative,” says Kathy, speaking of older pups. “All they need is a quiet, safe environment.”

At the time the couple learned about Polar Bear, they were sharing their home with three senior dogs. They knew Polar Bear would fit right in with their crew.

Join us in saving animals. Learn how.

When Polar Bear arrived at his new home, it was already set up just for him. To help Polar Bear and his senior companions best navigate their surroundings, Kathy and Joe created for them a special lower level area without steps. From there, Polar Bear can easily find his way to his food, and out to the yard.

Because his health was neglected for so many years, Polar Bear will always need extra medical attention. To Kathy, tending to Polar Bear’s health issues is an honor ― not a sacrifice. “My dogs are my children,” she says. “I feel so blessed to be able to take care of them at this time in their lives. I may have adopted Polar Bear, but he has given me so much in return.”

Polar Bear, who these days prances more than walks, felt like part of the gang from the first day in his new home. He sleeps soundly throughout the night next to Kathy. And he gets lots of extra attention from Merry Belle, one of Kathy and Joe’s other dogs, whose motherly instincts kicked in as soon as she saw Polar Bear.

When he’s not getting showered in kisses by Merry Belle, you’ll likely find Polar Bear out in the backyard catching some rays ― his favorite pastime. “When he closes his eyes now it’s easy to imagine that, in his mind, he’s smiling,” says Kathy.

Join Best Friends. Help Save Them All. 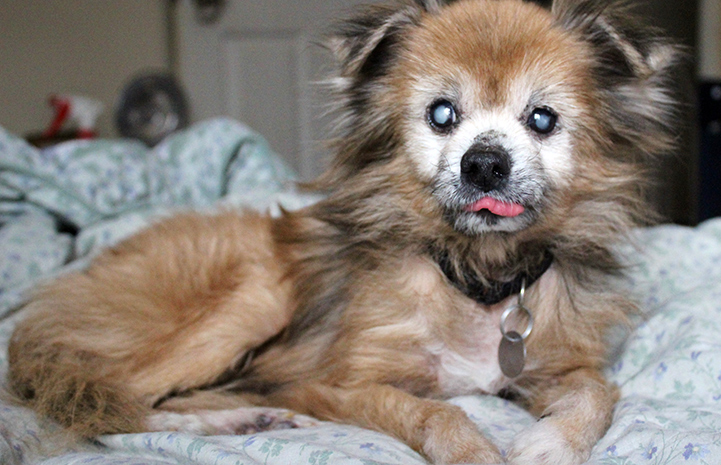