Lani, a pretty, ultra-petite black-and-white cat, takes a few tentative sniffs of caregiver Janette Nevils’ hand, not bothering to get up from the comfort of her fleecy bed. “She’s come a long way,” Janette says. “When she first got here, she’d hiss at anyone who came near her.” Lani is one of nine cats from a hoarding case who came to the Best Friends Pet Adoption and Spay/Neuter Center in Los Angeles for rehabilitation and to find homes. Since they arrived in January, the cats are experiencing what it’s like to be loved, one tentative step at a time. They’re learning that at Best Friends, pets aren’t seen as flawed; it’s just that some need a little extra help to find a home. 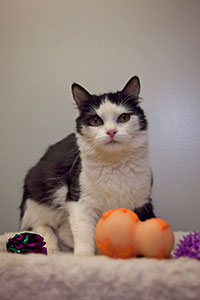 Lani and the other cats from the case had a bleak start in life. They were removed from a studio apartment with nearly 70 other cats, many of whom were sick and clearly hadn’t had much human contact. The cats were taken to Los Angeles Animal Services, which made them eligible to come to Best Friends’ adoption center, where the first order of business was getting them healthy and spayed or neutered. Then the bigger project began: helping them trust people so they could find homes.

Janette says, “With shy cats, you have to go slow and let them make the choice to allow you to pet them. You don’t want to force them.” In the beginning, the goal is to help the cats realize that when a person comes up to their enclosure, nothing bad will happen. Then, caregivers use a back scratcher to gently pet the cats in all their favorite places. When that’s going well, they begin touching the cats with their hands — always reinforcing that people don’t mean harm. Janette says, “You could tell they were all nice cats. They were just a little unsure of hands coming toward them. But once they started to get the petting down, they’d start purring.” 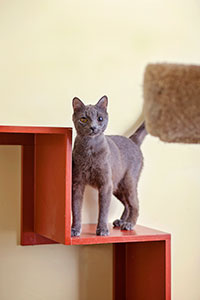 As the cats begin to get used to people, their unique personalities shine through past trauma and neglect. Buddy, a young cat with a steely blue coat, was shy at first. Janette says, “But with the help of staff and volunteers working with him, he really came out of his shell. And when we moved him into the free-roam room, he just blossomed.” Now Buddy spends his time scampering around, wrestling with toys and any other cat who’s game for a play fight.

The cats are making progress at their own speed, and that’s OK with everyone who is helping them move on to the next phase of their lives. One evening just after the center closed and everything was quiet, Janette noticed a movement in Lani’s enclosure. It was Lani playing, swatting toys around. Janette says, “They have moments when they’re totally carefree.” It was a glimpse of what Lani’s life will be like with more love and patience — two things she now has in spades.

How you can help pets

Learn about Best Friends’ work in Los Angeles, and find out how we’re leading the way to No-Kill Los Angeles by 2017. Go to bfla.bestfriends.org.