He used to be called Cucumber. With gray fur, white toes and big green/yellow eyes, he was just another cute kitten looking for love at the Best Friends Pet Adoption and Spay/Neuter Center in Los Angeles. Until February 1st, anyway. This month, he turned into someone special - someone a little more well-known. 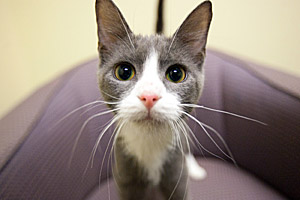 In honor of the 85th Academy Awards, Cucumber has been known lately around the center as Denzel Paw-shington. He was just one of many stars hoping to win big this month, except unlike those of the human (and actor) variety, these cats are hoping they'll score a home.

Through February 24th, the Best Friends Pet Adoption and Spay/Neuter Center is celebrating cats with a special promotion: the aCATemy Awards. All cat adoptions are half price at $25, and as always, adopters can take home two kitties for the adoption fee of one. Visitors walk past a big gold cat statue in the lobby, and the cat area is festooned with stars a la Hollywood Boulevard, with names like Brad Kitten, Robert Red-fur, George Clawney, Uma Furman, Bette Meowdler, Jennifur Gardner, Bengal Affleck, Lion Seacrest, Russell Calicrow, Elizabeth Manx and more.

Cat caregiver Katrina Beatson says that the promotion is about much more than "punny" names. It helps to increase cat adoptions at a key time of the year: the beginning of kitten season in Los Angeles. It's a critical time to make room for the inevitable surge of kittens that just about every shelter in the country experiences each spring. The February promotion has seen many cats adopted already. In fact, Denzel Paw-shington was one of the first to go. Katrina says, "He went out on a mobile adoption and didn't come back." She wasn't too surprised that he found a home quickly, explaining that young cats and kittens almost always get adopted faster than adult cats. But there's one standout "mature" kitty whose star shined brighter than all the others - a true underdog (undercat?) who won the prize over younger, flashier competitors.

And the award goes to … 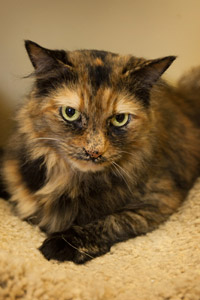 Katrina describes Pollyanna (who escaped the special celeb renaming, but was still included in the aCATemy Awards month) as "a gorgeous medium-haired tortoiseshell cat." She adds, "Pollyanna had been here longer than any of the other cats. For no reason, she just got overlooked." Then a couple came into the Best Friends Pet Adoption and Spay/Neuter Center looking for a cat who would get along with their timid corgi. That caught Katrina's attention because, she explains, "We used Pollyanna for testing dogs at the center to find out if they were reactive to cats." That means that she was a superstar for keeping her cool around dogs, and it was the most important quality that the couple sought in a new feline pet.

They didn't care that Pollyanna was around five years old or that she was picky about her cat friends. For her part, Pollyanna flirted and rolled around in her cat bed, putting on her best "pick me!" performance. Katrina says, "The couple looked at some other cats, but said that Pollyanna was probably going to be the one. The next thing I knew, she was being put in a carrier to go home."

While Pollyanna's permanently on location with her new family, there are still plenty more kitties hoping to land their dream role this month: much-loved pet in a forever home.

Cats at the Best Friends Pet Adoption and Spay/Neuter Center are spayed or neutered, microchipped, up to date on vaccines, and come with a free collar/leash, ID tag, bag of pet food, carrier and one month of free pet insurance. Click here for more information.