Image
Caregivers look for a friend for a lonely guinea pig named Rufus. After trial and error, they find the perfect BFF for him, another pig named Scout!
By David Dickson

Finding a buddy for animals isn’t always easy. Applying logic in terms of who ought to get along can only carry the day so far. Blame it on chemistry, that fickle matchmaker.

Rufus, one of the guinea pigs at the Sanctuary, had been living alone for a few months, which is how he lived before coming to Best Friends. He started showing signs of being lonely. "We could just tell that Rufus wanted a friend," explains caregiver Kristen Power.

Finding a friend for a lonely guinea pig 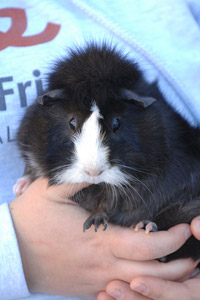 The caregivers’ first choice for a companion for Rufus was Stella, a guinea pig who looks and acts a lot like him. They’re both outgoing and both wanted a friend, and, heck, they’re both black and white. The perfect match? Not a chance. Their first playdate ended with Stella chasing Rufus around the pen, nipping him on the rump. (Not exactly an ideal icebreaker there, Stella.)

The next buddy they tried out was an obvious choice in one respect, but a long shot in another. Scout had already been living as Rufus’s next-door neighbor for several months. So yes, they were familiar with each other, yet they hadn’t actually been introduced. More to the point, they didn’t seem like a good match. "Scout was always really shy," Kristen explains.

Caregivers wanted to find out if the next-door neighbors could hit it off anyway. As a bonus, Scout and Rufus already knew each other’s scent, a big first step in the friend-making process.

The next phase, the physical meet and greet, is critical. Caregivers do everything they can to help make it successful. For one, they don’t include any toys in which one of the guinea pigs could be cornered. Also, first playdates take place in a supervised neutral space. 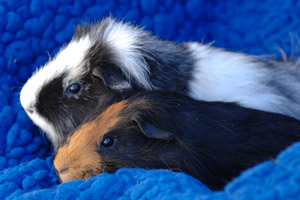 Right off, Scout and Rufus hit a tiny rough patch. Yet it wasn’t like the difficulty between Rufus and Stella. With Scout and Rufus, they’d have small bouts of bickering and then make up. "We kept tabs on them all day," points out Kristen. Bit by bit, these two guinea pigs, with different personalities, were learning to get along.

Soon, the two pigs began making great strides. After a couple weeks of close supervision and longer and longer playdates, caregivers decided it was time to try dropping in some real toys to see how they’d handle things.

One such toy, a small tiki hut, taught caregivers all they needed to know. Ecstatic with their new furniture, the two buddies started crowding in their hut together. Sometimes they’d have so much fun play-wrestling in there that they’d knock the roof clean off. "That’s when we knew that they were both totally happy together," Kristen says.

From all outward signs, these two weren’t a likely match. But hey, that’s what chemistry is all about. Life’s no fun if you can guess all the surprises ahead.

Sponsor an animal who could really use a good friend