When cats Henri and Simba arrived at the Best Friends Pet Adoption and Spay/Neuter Center, it was clear they were the best of buddies. They were placed in one of the adoption center's free-roaming rooms. Instead of living in cages, several cats live in a room together and can eat, sleep and play where and with whom they choose. Henri and Simba always seemed to choose to be together. Cat caregiver Janette Nevils says, "They followed each other around the room, and any time one got into their favorite bed, the other would nestle in."

The two cats garnered plenty of "oohs" and "aahs" from potential adopters when they saw them cuddling. Simba usually had at least one black paw tightly curled around Henri's tabby body as they slept. In these situations, adopters often end up falling in love with two cats at once when they see them cuddling together; but it doesn't always turn out that way. Janette wondered how the cats would do if they weren't adopted together. She says, "Some cats are more outgoing and would be fine with another cat, but there are others that are so obviously comforted by each other." 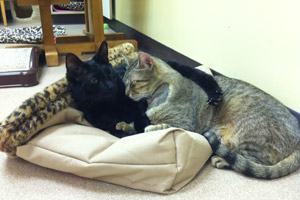 Looking for 'the one'

In early April, a young couple came to the adoption center looking for a cat. They had spent months researching everything they needed to know about having a cat. They wanted to ensure that they were prepared to offer a great home to a lucky kitty. Janette says, "They spent a lot of time figuring out who was the right cat for them. They visited our cats here at least four times." And after all those visits, they knew which cat was the one. Janette explains, "They were very much in love with Henri."

As much as they wished it were possible, the couple couldn't take in two cats. They talked with cat caregivers about whether splitting up Henri and Simba was the right thing to do. Janette says she felt that Henri would be just fine as a solo cat in his new home. She adds, "We were more concerned about Simba because he was the one that was really attached to Henri." But they could keep a close watch over Simba and hope that he'd find a new friend. 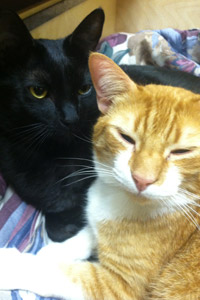 Henri went home with the couple, who reported back that he fit right in from the beginning, never missing a beat. Cat caregivers paid extra attention to Simba in case he got depressed at losing his friend. They hoped that the other cats in the room would be enough for him. "We get a lot of cats that really love other cats; it's just a matter of finding the right match," Janette explains. "We try various combinations based on personality, like putting two shy cats together, which makes them feel more comfortable." Simba wasn't shy - he was a lap cat, and he seemed to thrive when he had a best friend to cuddle with. As it turns out, there happened to be another cat who felt the same way.

Simba found a new friend in Sherbet, an orange male kitty. The two cuddled together and followed each other around, just like Simba had with Henri, except now potential adopters would see him sleeping with his furry black front paws wrapped around Sherbet's orange belly instead of Henri's tabby stripes. It goes to show that if they must be separated, even the most enamored kitties can find love again. Soon Simba found a new home too - with his new friend Sherbet -where it's a safe bet that the two are most likely cuddling at this very moment.