Image
Couple adopts pit bull dog, but then their homeowners association (HOA) tells them they can't keep him. The couple fights this breed discrimination.
By Nicole Hamilton

Nothing was going to stop Robert and Marie Garner from adopting Mowgli, a pit bull terrier mix they fell in love with at Best Friends Pet Adoption and Spay/Center in Los Angeles ― especially someone who would judge a dog just by the way he looks.

As far as Robert and Marie were concerned, Mowgli was a part of their family from the day they adopted him, and families stick together. But as the couple quickly learned, the journey to adopting Mowgli wouldn’t be an easy one, because it would require that they convince their homeowners association to change its thinking about pit bull terriers. 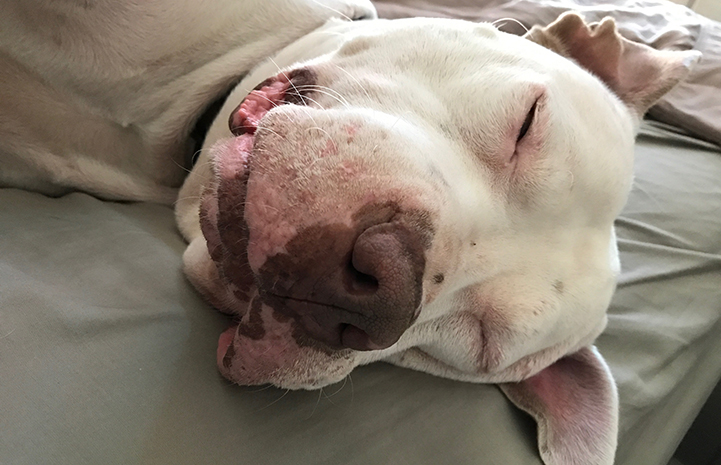 A pit bull terrier adopted by loving (and determined) family

Robert and Marie weren’t planning on adopting a dog on the day they decided to pay a visit to the adoption center. The couple routinely stopped there to spend time with adoptable pets and get a better idea of what type of dog they’d adopt when the time was right. But then one day they were greeted by Mowgli.

He was at the front desk, one of his favorite places, keeping the staff company. When Mowgli saw them, he began wagging his tail at warp speed and couldn’t wait to come to the other side of the desk to be petted.

“We knew he was our dog and that he was going home with us that day,” says Robert of Mowgli, who was surrendered to a Los Angeles Animal Services shelter before coming to the center. But what Robert and Marie couldn’t have known was how a neighbor’s complaint would threaten to keep Mowgli and his new family apart. 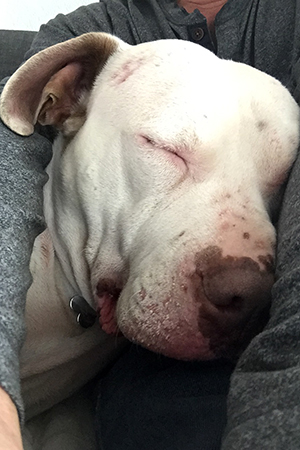 Robert had seen dogs of all breeds in the gated Los Angeles community where he and Marie live. He had no reason to think that bringing a pit bull terrier home would cause a problem.

Then a neighbor saw Mowgli, noticed his head scars possibly caused by a skin allergy, and told the homeowners association that Robert and Marie might have adopted a fighting dog. But Mowgli is more diplomat than dangerous dog. Just ask anyone who’s spent a few minutes with him.

“He is a phenomenal, extraordinary dog and a gentle giant,” says Amanda Yocom, dog behavior specialist at the adoption center. “He gets along great with dogs of all sizes and breeds, and loves meeting new people ― which is why we had him up in the front office, so he could greet everyone.”

When a representative from the homeowners association called Robert later that day to say he could not keep Mowgli because of the complaint, he and Marie were heartbroken and angry. There was no written rule that prohibited certain breeds from living on the property.

Robert knew the association had based its decision on the way Mowgli looked. Still, they couldn’t risk losing their home, so they reluctantly brought Mowgli back to the center, vowing that they’d come back for him. They weren’t going to give up.

“As soon as we came back without him, it felt like something was missing,” says Marie, who spent that evening crying. “He’s ours. We love him, and it was so hard to bring him back to the center.”

The next morning, Robert received a note from the homeowners association letting him know their thinking had changed. As Robert suspected, they came to realize that it was unfair to discriminate because of Mowgli’s breed. The couple was elated about returning to the center and re-adopting Mowgli, and wanted to get there as soon as possible before anyone else stepped in to adopt him. But there was one small problem: They both had previous commitments and could not make it to the adoption center.

Luckily, since Mowgli really was part of the family, Robert’s parents were happy to step in to help their “grand dog.” They were at the center when the office doors opened with the letter in hand, eager to show it to staff and bring Mowgli home again.

The city of Los Angeles is on track to become no-kill by the end of 2017; however, breed discrimination similar to what Mowgli’s new family encountered threatens the lives of pit bulls in Los Angeles and all across the country every day.

“It’s hard to think that Mowgli could have never gotten a chance to be our dog, just because of the way he looks,” says Robert.

It’s even harder for him to imagine anyone being afraid of Mowgli, knowing how much love the dog has brought to their home, and how Mowgli has helped his wife feel better again.

“He’s helped me get my life back,” says Marie, who was bedridden for months from an illness and just recently has been able to walk again. Rain or shine, she takes five-mile walks with Mowgli, who keeps her company during the day.

He loves relaxing on the couch with Robert after he comes home from a long work day. “Some people just don’t know how loyal and kind pit bulls really are,” says Robert. “But Mowgli would do anything for us, and we’d do anything for him, too.”

Join us and help save all dogs of all breeds 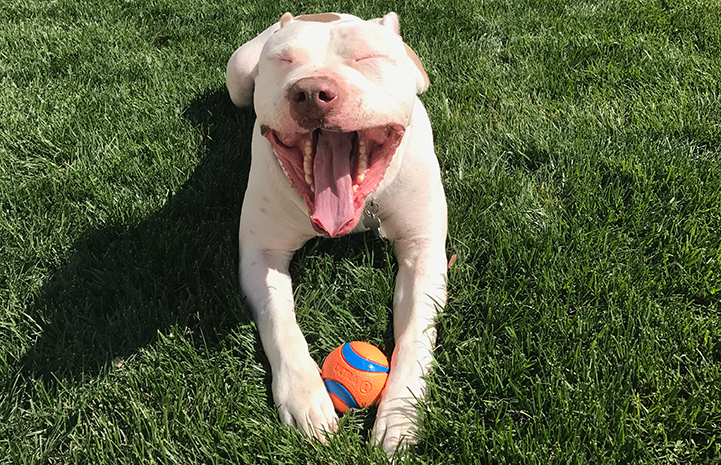