Image
Sick cat is nursed back to health and happiness at the Sanctuary.
By Christelle L. Del Prete

Mozart might not remember it, but he was terribly sick when he came to Cat World two years ago. He’d been living with a rescue organization in New Jersey that was so overwhelmed it was ordered to close. Poor Mozart hadn’t received the veterinary care he needed so badly, and he wasn’t feeling well at all.

A litany of health issues 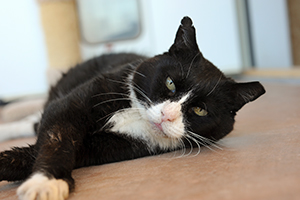 Because Mozart has feline immunodeficiency virus (FIV), a virus that weakens his immune system and leaves him a bit more susceptible to secondary infections, the lack of proper veterinary care and the crowded conditions where he lived really did a number on him. He arrived at the Sanctuary with a litany of health issues, including a painful ulcer on his tongue that made it nearly impossible for him to groom himself, and a severe upper respiratory infection that made it difficult for him to breathe. On top of it all, he was uncomfortably overweight.

It’s no wonder Mozart was so grouchy in those days. He was six years old, and life certainly hadn’t been very easy or fun for him. He couldn’t do some of the most basic things cats do, including playing, cleaning himself or even just running around his room. And he had a hard time making new friends. Every time his caregiver, Dale Oster, gave him the medicine he needed to get better, he would grab onto the cattery wall with one paw and swat at her with the other.

A room to himself 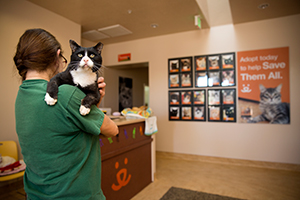 He also made it clear that the community living arrangements in Quincy House, the building in Cat World where cats with the most special needs typically live, were unacceptable. He just didn’t like other cats and was unhappy being around them. Concerned that his stress level would negatively affect his physical recovery, Mozart’s caregivers moved him to Cat World Headquarters, so he could have a room all to himself.

Once he settled into his own suite Mozart began to relax, but his breathing became more labored than ever. He suffered bloody noses and started eating with his paws because, if he put his head into his food dish, he couldn’t breathe. To help Mozart, the Best Friends veterinary team performed a nasal flush that his caregivers say was “lifesaving.” 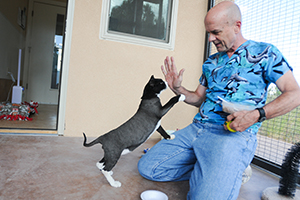 With the help of that treatment, medication, twice-daily nebulizing, and a diet and exercise plan, Mozart began to feel much better. In turn, the vast improvement in his physical health helped boost Mozart’s mood. All of his prickliness disappeared, and he became one of the brightest, sweetest cats around.

These days, Mozart’s health is fairly easy to maintain. His tongue has healed to the point where the ulcer can be kept in check with periodic squirts of green tea mouthwash. And his coat is kept short to help him with grooming. With his new, lithe figure, his breathing problem has all but disappeared. All this means Mozart now has a lot more time to focus on the good things in life — finally.

To bring hope and healing to more animals like Mozart, become a Best Friends member.