Image
Maltese receives treatment for kidney problems and a bloated abdomen and is feeling much better now. Dog also receives training to overcome his fear.
By Christina Green

Going from New York City’s concrete jungle to Kanab’s red rock canyons would be a big change for anyone, let alone an under-the-weather Maltese pup named Elf. The little dog had lost his home and landed in a city shelter, and was in need of treatment for his mysteriously distended belly. Because he required special medical care, it was the right time for Elf’s big adventure. A one-way ticket to the Sanctuary would provide him with medical care and a fresh start among some 1,600 other animals already getting the same royal treatment.

When Elf arrived at Best Friends with his poofy white fur and his sweet little smile, the next phase of his life began. Sanctuary staff would make sure he’d get everything needed to be happy and healthy again. But it would be some months before he could truly appreciate the effort.

The first order of business was, of course, to treat Elf’s bloated belly, so his first stop was the Best Friends Animal Clinic, a state-of-the-art vet hospital. And it’s a good thing he arrived when he did. Poor Elf was suffering from kidney issues and needed to have fluid drained from his abdomen.

Luckily, his health challenges were diagnosed and treated before they could become life-threatening. In fact, with medication to help his kidneys, along with a diet of special food to keep the stress down on his system, he can live a long and healthy life. So after a few days in the clinic’s spacious patient recovery room, Elf headed over to Dogtown to check out his new digs. 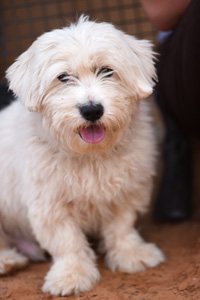 Securely back on his paws again, Elf got the same warm welcome all animals at Best Friends receive. A warm new bed and blankets gave him a comfy place to call his own in this new world. Toys provided a fun challenge, giving him lots to do, and he had plenty of outdoor space in his yard to explore. Soon enough, on-site groomers would give him a full makeover. These are just some of the things all Sanctuary arrivals receive to help them feel more comfortable and at home — that, and lots of love from caregivers, of course.

But while Elf was feeling better, looking great and settling into his home between homes at the Sanctuary, it became clear that he would require even more help to truly be his happiest self, because, frankly, he was a bit of a cranky-pants. It sometimes seemed that as far as Elf was concerned, you could leave the welcome mat at his doorstep and just feel free to turn right back around and walk away.

But it wasn’t his fault, and caregivers soon realized the source of Elf’s troubles: He was afraid.

“He was especially fearful of men when he arrived,” says Dogtown caregiver Rebecca Woodruff. “There were several men on the first tour who had come into Elf’s area, and he didn't quit barking the whole time.”

So, of course, Elf’s welcome committee added socialization to the list of good things he’d get during his time at the Sanctuary.

Caregivers worked to gain Elf’s trust by holding a Kong stuffed with goodies for him to lick. When he was comfortable with that, they shifted his attention from the Kong to the goodies in their hands. Also, says Dogtown caregiver Haven Diaz: “We kept inviting every man who passed by, including visitors and staff photographers, to interact with him through the gate.”

Over time, the little gifts and goodies have helped caregivers make headway with Elf.

“I knew he had come a long, long way when a man on tour walked up to about one foot from his run gate, looked at him and talked to him. Elf just looked up at him and didn’t make a peep,” says Rebecca. “He also loves to cuddle. If he knows you well, he will come sit on your lap and give you tons of kisses.”

Now that Elf is feeling better inside and out, it’s only a matter of time before he’ll get the ultimate gift: a home of his own.

Celebrate with us and help other pets like Elf. Here’s how: Get your holiday shopping done with the Best Friends Catalog of Kindness. It’s full of things that make it possible for Elf and many more pets like him to get the royal treatment all year long.