Image
Cat is obsessed with food and exhibits aggressive food-guarding behavior, hissing and growling if anyone tries to get near him while he is eating.
By Christelle L. Del Prete 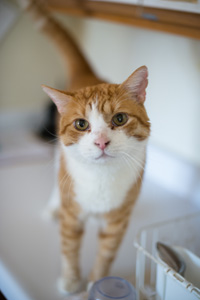 With a name like McSnuggles, you’d expect a perfectly sweet, snuggly cat. And, most of the time, that’s exactly what you’ll get with the handsome orange-and-white cat who recently came to Best Friends. McSnuggles won’t hesitate to greet a friendly stranger and he likes to be petted. But there are exceptions, and those exceptions happen twice a day — at breakfast and dinnertime.

Aggressive food guarding in a cat

When the food comes out, sweetness takes a back seat. That’s because McSnuggles isn’t just interested in food — he’s obsessed with it. Whenever he catches a whiff of an upcoming meal, that’s all he can think about, and he starts meowing as loud as possible. Then, as soon as his bowl is on the floor, he dives in and gobbles down his meal as if he hasn’t eaten in a week. And, while he’s eating, if people don’t stay far enough away from his food bowl, he’ll guard it by growling or hissing.

Since there are a lot of blanks in the nine-year-old cat’s history (he was with an animal control agency before he came to Best Friends), no one is sure why McSnuggles feels the need to protect his meals from people. But Cat World caregivers and the Best Friends veterinary team are working on solutions to help McSnuggles feel more comfortable and keep everyone safe.

Crafty cat always on the lookout for food

Because McSnuggles has diabetes and receives insulin twice a day, it’s important that his meals are regimented so that he eats before each injection. And while his medical condition may not explain why he wolfs down his food or why he turns into such a grumble Gus when anyone gets anywhere near it, caregivers are getting to know his habits so that they can manage his food issues successfully. And that takes some diligence, because when it comes to food, McSnuggles is crafty. 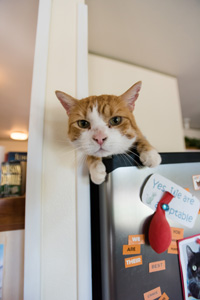 One of his favorite places to lurk is in the kitchen while his caregivers are on their lunch breaks. He follows them around, watching for an opportunity to steal a tasty treat. And forget leaving doughnuts out in the break room because McSnuggles would help himself to a whole dozen. He also tips over the trash cans and rummages through the recycling bins if they’re not stored securely.

Luckily for McSnuggles, most of his food-motivated behavior is easy to manage. For example, the trash bins are always put away, and he’s allowed to hang out in the kitchen when there’s no food (cat or human) being prepared or left out. During food preparation times, his caregivers have taught him to go to a separate room to await his meal. That way, McSnuggles is a lot less grumbly because he’s less frustrated while dinner is being prepared.

Since McSnuggles gobbles up his food quickly and doesn't guard his empty food bowls, caregivers simply wait until he has finished eating before picking up his dish. And because he doesn't try to steal any of the other cats’ food, he can rejoin the group when he’s done with his meal.

Although the reason for McSnuggles’ food guarding might always remain a mystery, he’s shown that he can live a happy, normal life as long as his human friends manage his behavior. Best of all, when food isn’t on his mind, he’s a cat who definitely lives up to his sweet, snuggly name.

To help more animals like McSnuggles get the royal treatment they deserve, make a donation to Best Friends.