Image
Manx cat with Manx syndrome (shortening of a cat's back end, preventing the spinal cord, organs and muscles from developing properly) gets treatment.
By Christelle L. Del Prete 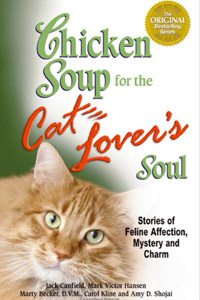 Marcus is a former cover model cat – his face graced the 2005 issue of the ever-popular “Chicken Soup for the Cat Lover’s Soul” series – so it’s understandable that he’s got a little bit of an ego. Caregiver Alisa Alexander describes it as a lion-like personality and a well-developed sense of entitlement. But she’s quick to point out that the senior cat is equally gentle, kind and loving. He likes to cuddle with people and purr while he’s doing it. Incredibly resilient, Marcus has dealt with some health issues over the years, including a recent major surgery. But his confidence – and his status in Cat World – is as robust as ever.

Marcus is a Manx cat. Manx cats carry the gene for shortened tails, which is an endearing quality and part of what makes them a unique breed. What’s not so cute is that sometimes the gene causes Manx syndrome – shortening a cat's entire back end and preventing the spinal cord, organs and muscles from developing properly. Marcus has Manx syndrome. Born in 2000, he’s an older gentleman, and the gastrointestinal problems caused by the syndrome have worsened over time.

Recently, Dr. Patricia Kupanoff and Dr. Catherine Popovitch, visiting veterinary surgeons who generously donate their time and expertise to help Sanctuary animals like Marcus, performed surgery to make him more comfortable. Both Catherine and Best Friends veterinarian Dr. Patti Patterson happen to be huge fans of big orange cats, so Marcus (who was already in skilled, capable hands in the Best Friends Animal Clinic) got the royal treatment. Being who he is, of course, he’d expect nothing less. 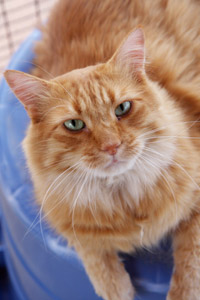 “He’s had a tough year,” says Alisa, when she explains some health challenges Marcus had prior to the surgery – including an allergic reaction to some bug bites. But now that Marcus has recovered from surgery, and is back in Cat World, he is clearly unfazed by past discomforts. Curled up in his bed in the lobby of Benton’s House, the building in which he lives, he looks confident and content. “He knows he’s famous,” Alisa says, “and he’s become an icon around here.” He likes to greet people who stop in on the Sanctuary tours, and he’ll even autograph (or “pawtograph”) copies of “Chicken Soup for the Cat Lover’s Soul” books on occasion.

But don’t make the mistake of thinking that Marcus just lies around like a lion king all day. He loves to go for walks on a harness and leash, which helps to keep his muscles strong and his digestive system moving. He’s smart, too, and enjoys enrichment activities. Alisa believes he’s as intelligent as Raed, a cat rescued from Lebanon who is something of a prodigy in Cat World Headquarters. Raed has learned many tricks and can play the piano. And, now that Marcus has already mastered and surpassed dog and cat toys, a baby grand may be next on his list.

Get more information about Marcus and other adoptable cats at the Sanctuary.