Image
How an older, diabetic cat and two college students became a family of three
By Cathleen Halsey

When Sharky the cat came to the Best Friends Lifesaving Center in Salt Lake City, “Baby Shark,” a children’s song about a family of sharks living in the ocean, was a viral hit. The staff caring for Sharky would sing the catchy tune about a baby, mommy, daddy, grandma and grandpa shark to him and the name just stuck.

Grandpa Sharky stuck around, too, because the 12-year-old senior was in pretty rough shape when he first arrived at Best Friends from a local municipal shelter. It took months of careful monitoring and care to get his diabetes under control; however, Sharky soon became a favorite among center staff and volunteers with his laid-back personality, pink ears and nose, and a tongue that he’ll occasionally stick out at you.

The gray-and-white senior sometimes didn’t feel well, but that didn’t stop his personality from shining through. “He’s so much fun to be around. He loved to be held and he would perch on your shoulder just like a parrot,” says Rhoney Farrimond, a Best Friends adoption specialist, who recalls one of his favorite pastimes while at the center. “Grandpa Sharky loved watching bird and squirrel videos on our front desk computers. He was fun and entertaining to watch because he would try so hard to get the birds and squirrels off the screen.”

Throwback to my fun days in the shelter being taken care of by such wonderful people at Best Friends Animal Shelter, I love my birds. Video sent in by the wonderful @endlessemily

Caring for a diabetic cat

In an effort to control Grandpa Sharkey’s diabetes, the medical team changed his diet to a high protein, low carbohydrate formula. During the transition to the new food, staff closely monitored his blood glucose levels.

Getting poked by needles on a regular basis would be a stressor for anyone, but especially animals who don’t understand what is being done to them and why. But Rhoney says Grandpa Sharky was a trooper whenever it was time to check his blood glucose levels. Over time, his levels slowly returned to a normal range without the need for insulin. But he still needed a home.

More about diabetes in cats 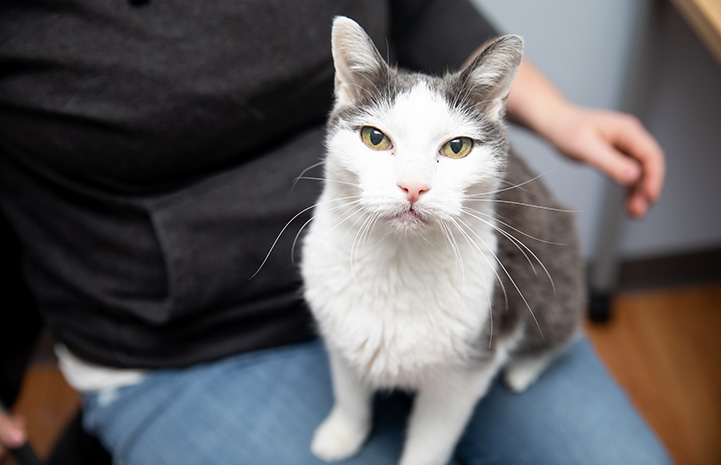 Grandpa Sharky lays on the charm

College students Victoria Bird and her boyfriend Michael Katz met Grandpa Sharky when they came to the center hoping to adopt a pet mouse or hamster. When they learned that Best Friends doesn’t have pocket pets for adoption, they stayed on to look at the cats.

Victoria and Michael say they were adamant about not adopting a cat. Famous last words, right? “When we saw Grandpa Sharky, we fell in love with him,” says Victoria. After reading about his special needs, they asked for more information.

Staff reviewed Sharky’s health history and special dietary needs with Victoria and Michael. True to their word, they held off adopting him that day. They made themselves go home without him, but it didn’t last. They couldn’t stop thinking about him.

Victoria and Michael will tell you that from the moment they met Grandpa Sharky, they were hooked. After some discussion, they returned to the center to get Sharky. That particular day coincided with the first day of a short-term foster event that allowed people to take pets home from the center for just a day or two. The opportunity to foster Grandpa Sharky overnight was the perfect chance to solidify what they already knew in their hearts.

“We were so excited to bring him into our home that we went out and bought a bunch of toys and treats to give him,” says Victoria. “Since I am a seamstress, I made him his own warm and soft cat bed. We were cautious when we brought him home and kept him in the bathroom at first, but after a while we let him explore. Everything turned out great over those two days.”

Michael agrees. “When we first visited Grandpa Sharky at the adoption center, he was the sweetest guy, and he seemed excited to interact with us. The opportunity to bring him home as a short-term foster just confirmed that we wanted to make him a permanent member of our family.” And with that, they adopted him. Finally, Grandpa Sharky was home. 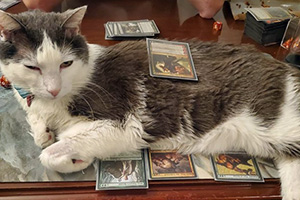 The sweet kitty is thriving in his new home. Michael and Victoria love and spoil him every day. He still loves perching on shoulders and watching for birds and squirrels. He snores when he sleeps and has the couch thoroughly broken in by finding every possible way to sleep on it. Michael sings him a song when he eats.

His new family shares the highlights of Grandpa Sharky’s new life on Instagram: sleeping in cute ways, stretching out in the middle of a card game, and standing on a keyboard (@grandpa_sharky). He’s still a favorite, like he was when he got his special name at the center. The only difference now is that he’s the favorite in his very own home.

Find love: Adopt a pet near you