Meant to be wild 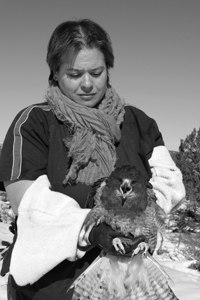 In the world of wild birds, red-tailed hawks are known to be fairly laid-back. Generally they just perch up high on a branch and wait for whatever the day brings. But all rules have exceptions, and recently Best Friends hosted a larger-than-life hawk who didn’t get the memo that he was supposed to be a cool character. Instead, he was full of opinions about captivity, and made sure everyone knew them.

Best Friends collaborates with other wildlife rehabilitators and sometimes animals are exchanged when they could benefit from a change of scenery or specialized facilities. Last fall, Carmen Smith, manager of Wild Friends at the Sanctuary, met Debby Pappas from Second Chance Wildlife Rehabilitation of Price, Utah, to transfer four birds.

Carmen had brought a prairie falcon and a great horned owl to Second Chance so they could improve their survival skills before being released. And Debby brought two hawks in need of reconditioning their flying strength in Best Friends’ large flight aviary before being released back into the wild.

That’s when Carmen first learned she wasn’t dealing with just any red-tailed hawk.

A bit of a biter

“Before we transferred him from car to car, Debby warned me he was a biter,” Carmen recalls. “When he was being held, he screamed so loudly that concerned citizens rushed over to see if any bird abuse was happening.” Debby assured them that everything was OK and that they were both licensed wildlife rehabilitators who were being careful with the birds.

There was some doubt as to whether the red-tail would be releasable back to the wild or whether it would be necessary for him to become part of a federally-permitted wildlife educational program. Some air time in the big flight aviary would strengthen his wings. They’d just have to wait and see.

A gunshot wound to the left wing had originally brought the hawk to Second Chance, and after excellent care, the wound had healed well. But he still tired quickly when flying and needed to build more endurance so he didn’t get winded so easily and could thrive in the wild again.

The feisty bird was not shy about expressing his opinion of captivity. Wild birds are beautiful creatures who should never be deprived of their lives of freedom, but sometimes, if they’ve been injured, they have to be in captivity for rehabilitation. While in captivity, they don’t behave like domestic animals. Their wild nature is an expression of the majestic beauty of the natural world. Our role as humans is to appreciate and protect them as they are. 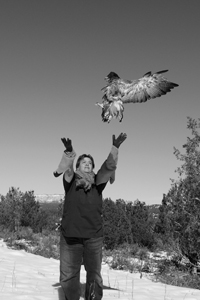 By the beginning of March, the red-tail’s routine exercise in the flight aviary had paid off. He was doing splendidly and was ready to go back where he belonged. But he didn’t go without a special farewell.

The moment Carmen released him into the air, he made a U-turn and flew straight back at her, instead of soaring free up into the heavens. He was apparently intent on expressing his feelings about his months in captivity.

Carmen managed to catch the hawk in midair, and they both tumbled to the ground. Obviously, the first attempt hadn’t gone as planned, but since nobody was hurt, they tried again. This time Carmen made a point of turning the hawk so he faced straight up into the blue sky. The second time was a charm, and he soared first off to the side and then straight up into the sky.

Even though the red-tailed hawk was less than thankful for her months of care, Carmen was still happy with her work as she watched him fly, wild and free again. She says, “He was flying beautifully.”