Image
Bossy cat is adorable because of her pushiness. She's a spunky "old lady" cat at 12 years old and knows what she wants out of life and how to get it.
By Christelle L. Del Prete

Formerly an abandoned cat, Esther was super shy and hiding a lot when she first came to the Sanctuary this past September. But since then she’s been letting her bold and endearingly bossy personality show.

The first thing Esther did when she moved into Cat World was to dive under the desk in the office and claim the space as her own. It became her safe place. She would sleep there and had to have her food delivered there, because she wouldn’t come out to eat. Though the office is still Esther’s favorite place to hang out, she’s expanded her horizons ― especially when it comes to ringing the dinner bell. That’s one area where her shyness falls away and she goes into full bossy cat mode.

Bossy cat is anything but timid

Esther is 12 and has a cute old lady personality, says Sydney. She knows exactly when meals are about to be served. If she hasn’t already ventured out into the lobby by then, she will come to the doorway of the office to ask for food and treats. And there she will sit and yell loudly until she gets her share.

At the end of the day she’s back in the doorway, begging for the treats caregivers like to give her before they leave for the day. Then, she’s anything but timid. “She has a funny look on her face as if to say, ‘I know you have the good (food) stuff hidden somewhere,’” Sydney says. 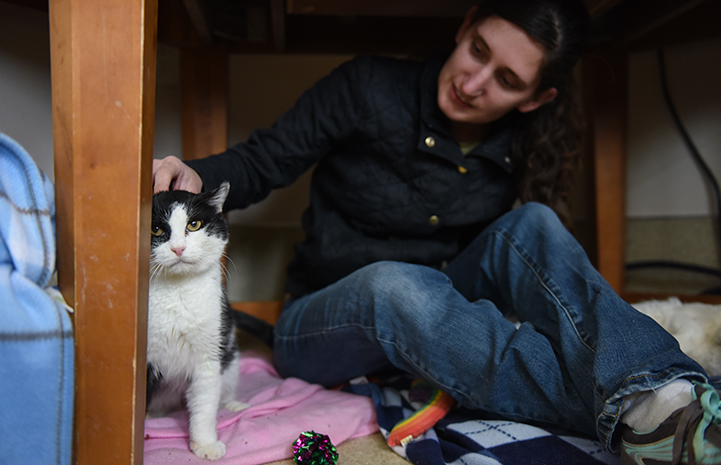 Cat is learning to trust

Though no one is going to forget to feed Esther in Cat World — nor will they deny her the yummiest food and treats — she’s not quite yet convinced of that. That’s because she’s still learning to trust people. While no one knows what her life was like before she was abandoned, she seems bound and determined to make sure no one will ever let her down again.

Cat World caregivers are working to earn her trust while letting her set the boundaries and the pace. For example, Esther is a bit reserved when it comes to petting. She’s made it clear that she doesn’t want a ton of it just yet. But she likes to be gently stroked or brushed on the top of her head — so much so that she starts to drool.

If she’s in her safe place, she’ll sometimes even let strangers reach under the desk and pet her. The more trust she forms, the more love and attention she’ll take.

Esther’s been stepping out of the office and spending more time in the lobby each day. And she never misses a chance to remind them when it’s dinnertime. “She comes out further and further to yell at us every day,” Sydney laughs

Some people might call a cat like Esther pushy. But her caregivers love her spunky personality. “I think that's why I love senior cats so much,” Sydney says. “They’re set in their ways, they know what they want, and they’re not afraid to tell you about it.”