Image
Five new goats and their pig friend are all the buzz around the Sanctuary.
By Best Friends Animal Society
By David Dickson

The goat population at Best Friends just doubled overnight with five new incredibly cute arrivals. And good gracious, do these five small-breed goats have a knack for drawing attention. All you have to do is lay eyes on any of them and you find yourself wanting to reach out and offer each one a scratch on the back. 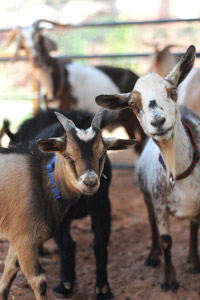 There are new kids in town.

Ranger, Becky, Lisa, Bart and Bambi came to Best Friends when their person could no longer meet their needs. They’re all fairly young, and not all of them know what to make of people. Becky, the mom, is still somewhat bashful toward people. Bart and Lisa, the two babies, are young enough that they’re trying to figure humans out, while Bambi has been showing growing curiosity toward her caregivers.

Ranger, though, is in a class all his own. "Ranger is super friendly," says horse manager Jen Reid. The moment anybody sets foot in the play area, Ranger rushes over to say hello. If you don’t notice him quickly enough, Ranger has no qualms in offering a friendly tug or two on your pant leg to make sure you realize he’s there. You know, just in case you somehow missed the goat galloping straight at you.

These five lived together in the same home and are currently sharing the same play area at Best Friends. They have two large adjoining pastures to explore, complete with huts and hiding places to grab some personal space when needed. Funny thing, though, most days you can find them all crowded together in one spot like sardines. They really like being around each other.

The misfit who fits right in

In addition to the five goat buddies, there’s actually a sixth animal in the tight-knit group. Petunia, a young potbellied pig, also lived with them in their previous home. Since they all get along so famously, she’s been staying with the goats for now. 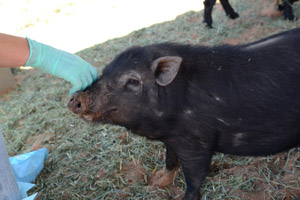 Petunia gets some pets from a caregiver
despite her medical quarantine.

Petunia’s previous person rescued her from a horrible situation, where she’d been neglected and barely had enough food to survive. The rescuer didn’t have Petunia for very long, so she’s still rather skinny, yet she’s working on that problem happily every day. "She eats like a champ," Jen says.

Though these six animals might have superpowers when it comes to catching the attention of visitors, they’re not yet out of their medical quarantine period (standard practice for all new animals to Best Friends). In other words, visitors aren’t allowed inside their pastures yet. Soon that will change, though, and you can expect a steady stream of folks wanting to meet the new kids on the block face to face.

Once that happens, and they’re cleared for adoption, it’s a safe bet the recently doubled goat population will drop back into single digits before you can count to 10.

Ever wondered if adopting a goat was right for you? Here are a few things to consider before you start buying extra shoes for them to steal when you’re not looking.