There's a great big world out there to explore, a fact not lost on most animals whenever they get a chance to check out some terrain. As far as Jezebelle the pig was concerned, however, she didn't want to see much of the world at all. Not other pigs, not people, not anything.

When Jezebelle came to Best Friends a few years ago, she wanted to stay in her own little bubble. "She was just very, very shy," explains Best Friends staffer Diana Asher.

Going for walks wasn't terribly high on her to-do list, either, for a number of reasons. As one of the senior pigs at the Sanctuary, Jezebelle sometimes has challenges with arthritis. 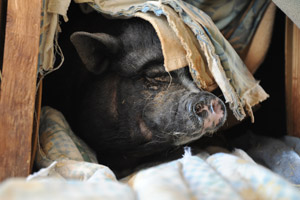 Caregivers wanted to help Jezebelle find a few more reasons to get out of bed in the morning. If she could learn to enjoy human company, a scratch behind the ears, for example, would never be far away.

Diana, who felt a connection with Jezebelle and wanted to help, started reading out loud to Jezebelle from the other side of the fence. This provided some safe distance while letting Jezebelle grow accustomed to her. "She appeared to listen," Diana says. "She certainly knows my voice."

Ultimately, Diana and Jezebelle became quite close. "I got attached to her," Diana says. As for Jezebelle, she'd perk right up whenever Diana came by. (She did indeed learn to love head scratches!)

Their closeness helped Diana notice some remarkable changes in her friend recently.

Not long ago, the pigs at Best Friends had an extreme home makeover. Their already-comfortable houses got traded in for much bigger structures — every bit as comfy and cozy, of course.

Their whole play area was opened wide up, too, providing the pigs with a much larger communal area to explore. They can hike up and down hills and mix and mingle like never before. "It's absolutely spectacular," says Diana.

One of the key benefits to this arrangement is the added exercise. Admittedly, in the beginning, Jezebelle didn't want to take much advantage of the wide-open spaces. She'd stay in her own quiet area, watching the world from a distance as had been her habit.

Before long, though, curiosity started getting the better of her. She began exploring more. And then a bit more beyond that. She was also willing to go for ever longer walks outside. 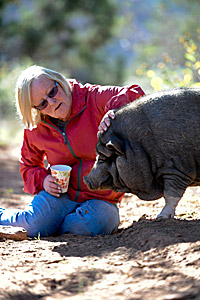 This senior arthritic girl began slimming down and getting fit more than ever before. As she did, she found a whole new side to life. "She can just walk, walk, walk now. It blows my mind," says Diana.

These days, Jezebelle is convinced that adventure is often right around the corner. She struts from one corner of her vast play area to another, inspecting all that life has to offer. When Diana visits, as soon as Jezebelle hears her voice, she literally comes bounding across the ground, running and bouncing for all she's worth. This is one energized pig!

She's buddied up with a few other pigs. While Jezebelle used to steer clear of other pigs, this new-lease-on-life thing is a package deal. She's got two handsome sleepover buddies, Teddy and Arnold. "Pigs are very social creatures," says Diana. It's a great sign that Jezebelle has found such good potbellied friends.

Everybody who knows and loves Jezebelle couldn't be more thrilled at how she's found such renewed enthusiasm for life. "She's so happy," Diana says.

The pigs at Best Friends, as well as all the other animals, love meeting new faces. Please consider volunteering at the Sanctuary for your next vacation.