Remember Himie, a Rottweiler with a message in a bottle taped to his collar to help him find his way home? He has, indeed, found his way back. Today he is home with his family once again.

Waiting in the front yard for him were Gary Karcher and his 81-year-old mother, Ethel. Gary grinned from ear to ear as Himie arrived on May 9 at his Violet neighborhood in St. Bernard Parish. 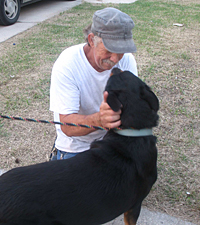 As soon as Himie got out of the car and stepped onto the sidewalk, his nose hit the ground and he ran all around the front yard, sniffing. Then he greeted his owner by licking his hand. Gary dropped to his knees and hugged the dog he’d written the note for. "Himie, you’re home," Gary said. "Look around you, boy, you’re home."

Gary tossed a basketball in the front yard. Himie fetched it and dropped it at Gary’s feet. It was just as it had always been.

Besides getting Himie back, Gary was also given Himie's original collar, which still had duct tape on it. "I'll never forget this," Gary said.

The reunion was a day Gary had been waiting for ever since he learned in October that not only Himie, but also his mother’s two dachshunds, Pudgy and Precious, were alive and safe after being rescued by Best Friends and taken to an animal relief center in Tylertown, Miss.

Because their house was unlivable after Katrina slammed into the Gulf region, the Karchers couldn’t keep their dogs. They asked Best Friends to continue taking care of them until their house was finished. Precious was reunited with the Karchers the same day as Himie. Pudgy, in a foster home in Texas, is scheduled to arrive home soon.

Gary and his mother stayed in a FEMA trailer on his brother-in-law’s commercial property while Gary saved up enough money to start renovating the house. A $5,000 insurance check covered the cost of a new roof and window repairs. Donors gave him $500 in gift cards and cash.

Then Gary on his own began rebuilding the home that sits in one of the hardest-hit neighborhoods in New Orleans. But the repair money soon ran out.

When volunteer Susie Duttge heard about Gary and Himie’s plight, she began raising funds. She was able to collect more than $4,000 to cover much of the material costs. Gary did the majority of the labor himself, including electrical rewiring and hanging sheet rock.

Once the plumbing was done and the electricity turned on, he and his mother moved in. A day later, Himie and Precious moved back in too.

"Gary stayed up 24 hours a day to get this done," Ethel said as she followed their dogs around the house. "He wanted Himie home."

When the hurricane hit, Gary, whose mother had already evacuated, stayed behind with their dogs and a neighbor’s chocolate Lab. At one point, when the water got too high, he floated Precious and Pudgy in a plastic tub to keep them dry. He put Himie and the Lab in a boat. "I risked my life for these dogs," Gary said.

But a week later, law enforcement officers ordered Gary out of the house. They wouldn’t let him take the dogs. That’s when he wrote the note. He also drained the water heater and filled up bowls and gathered all the food he could find for the dogs. Then he was evacuated out, leaving Himie and the others behind.

Meanwhile, on Sept. 20, while a Best Friends rescue team was in St. Bernard Parish, they found Pudgy and Precious together on a street. Two days later, Himie was rescued and the message in a bottle was discovered. Within an hour of posting Gary’s note on the Best Friends website, readers located Gary at a rescue center in Oklahoma.

His letter started out with, "HIMIE he a big baby."

Gary included his name, the last four digits of his Social Security number, and wrote that Himie and the dachshunds were on heartworm prevention and that Himie was on eye medication. He put both the note and a tube of prescription eye salve in the bottle and then duct-taped it to Himie’s collar.

"... I hope they make it," the letter read. "It's like leaving your kids. I hope they stay with each other. If you find them, please let me know."

"(Himie) is well trained, and loves kids and other dogs, and is house trained," the note continued.

Himie, in fact, adores kids. Welcoming him home were a handful of neighborhood boys. "Hey, Hime," one of the boys, Michael Diaz, said as Himie ran up to him.

Himie rolled over for Josh Stigler, who lives across the street. "I used to play tug of war with him every day," Josh said.

"Himie has always loved kids," Gary commented as he looked on.

For Ethel, seeing Gary happy once more and having both Himie and Precious back home is what she’d been hoping for.

In Gary’s eyes, being without Himie is not an experience he wants to repeat.

"I ain’t leaving him next time," Gary said about the dog he'd had since Himie was three-and-a-half-weeks old. "I never thought I’d see him again."