Image
One special dog brings a family together in an adoption worth celebrating.
By  Denise LeBeau

Misty, the cutest tan and white pit-bull-terrier mix, was a bit more sedate than her canine cohorts at the Best Friends Pet Adoption Center in Salt Lake City. While most dogs waiting for adoption will clamor at the sight of a person, Misty just didn’t. The sweet dog was rescued and brought to the center by the folks at Salt Lake County Animal Services (SLCoAS). Months passed, and while her popularity with the staff grew, that magic adoption moment wasn’t happening. Misty had been looking for a home since April, but just as the seasons changed, so did her fate. 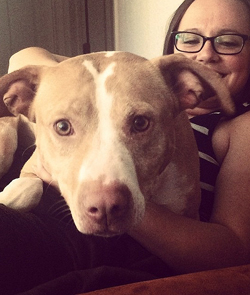 The Best Friends Pet Adoption Center is part of Best Friends’ No-Kill Utah (NKUT) initiative, which brings together a coalition of animal welfare organizations to end the killing of dogs and cats in shelters throughout the entire state. Coalition partners such as SLCoAS bring pets to the center to showcase them for adoption in order to help find homes for more of their pets — especially those who have waited a long time, like Misty.

Kimberly and Austin Mattson had been looking for a dog for a while, and they wanted to find just the right one. Austin says, “Kimberly and I both have moderate to severe anxiety issues and battle depression. We don't plan on having children, but we have a deep love for animals.” Finding a pet who would have a calming influence on them was key.

In October, their search led them to the pet adoption center, where they spotted Misty, who, as usual, wasn’t clamoring for attention. “Upon meeting Misty, our first impression was that she was sad,” says Austin. “My wife and I looked at each other and felt as though we may have found a dog who needed us as much as we needed a dog.”

When they asked to take Misty out, they realized she wasn’t depressed. With some one-on-one time, Misty warmed right up, licking their faces. She was a happy dog after all. And they learned something else about Misty. She loves sitting on people’s laps. “We knew at that moment, Misty belonged at home with us,” says Austin. 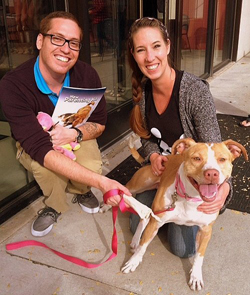 Two days after meeting Misty, with their landlord’s permission in hand, they returned to the center to be greeted by the adoption coordinator, who was thrilled to see them because it meant Misty was going home — finally. Misty has since given the Mattsons so much joy. They have loved watching her personality blossom. She’s curious and playful, and loves chewing on the many items they have spoiled her with.

She’s also been much more than a calming presence. “Misty has helped improve our relationship, as well as each of us individually,” says Austin. “It’s easy to get stuck in a rut and wind up wallowing in a funk, but with Misty, we have to address and focus on her needs.”

Walking, feeding, loving and playing with Misty brings the couple so much joy. Misty has gently caused them to participate more in life. “It's so easy to just be lazy, (but) living with a pet is hard work, and the discipline of it has been good for all three of us,” says Austin.

While the Mattsons did save Misty’s life by adopting her, they think of it in a different way. “We don't focus too much on saving her life because as we see it, adopting her could very well have saved ours,” says Austin. “She brings so much love to our lives.”

To help more animals like Misty go from homeless to home, become a Best Friends member.

Learn more about how Best Friends is working to make Utah a no-kill state.