Moby speaks up for shelter pets

Image
Moby the musician creates a music video called ‘Almost Home' with the help of dogs and cats from the Best Friends Pet Adoption and Spay/Neuter Center.
By Michelle Sathe

Superstar musician and long-time animal activist Moby is speaking up for shelter pets in his touching new lyric video for “Almost Home,” a collaboration with Damien Jurado from the album “Innocents.”

During his 20+ year career, which started with a DJ gig in college, Moby has sold over 20 million albums and played more than 3,000 concerts.  His first single “Go” (1991) was hailed by Rolling Stone as “One of the Best Records of All Time.” 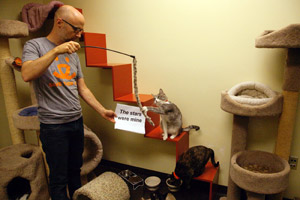 The “Almost Home” video, released on YouTube and social media on Dec. 19, features dogs and cats from the Best Friends Pet Adoption and Spay/Neuter Center in Mission Hills, California.

Holding up lyrics from the song, Moby is clearly in his element while interacting with the pets, many of whom return his affection on camera.

“The song is about the shared idea of what home means to us. One thing almost all people are in agreement on is that animals need homes,” he said.

While the subject matter was serious, Moby found the experience of interacting with the adoptable pets to be incredibly rewarding.

“One of the goals to make this video was to bring attention to Best Friends and support adoption, but I did also have a selfish tangential agenda,” he said. “Almost nothing makes me happier than rolling around on the floor with a bunch of rambunctious dogs and spending time with cats.”

The minimalist video, which cost “roughly $0” to produce, was released during this season for a reason.

Benefits of adopting a pet

As someone who’s cohabitated with rescue animals his entire life, Moby said pet adoption is a beneficial experience for all involved.

“Now, especially with so much objective information showing that animals help with immune systems, cognition and life expectancy, adopting a pet is an incredibly altruistic yet wonderfully self-serving thing to do,” he said.

Moby currently doesn’t have any pets of his own, but he sees that changing soon. 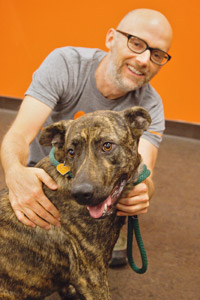 “My travel schedule for the last 20 years has prevented me from being able to adopt. Things are finally calming down, so I’m hoping to adopt in 2014,” he said. “I’m trying to figure out if that means adopting two dogs, two cats or a dog and a cat.”

In 2012, Moby first became involved with Best Friends. Driving through his neighborhood in Los Angeles, he noticed an adoption event and stopped by to meet the pets and talk to the people involved. Shortly thereafter, Moby participated in an NKLA Adoption Weekend.

When he found himself in Southern Utah, Moby visited Best Friends Animal Sanctuary for lunch and a tour of the grounds.

“The Sanctuary is a really remarkable place. It’s physically beautiful and the facilities are amazing,” he said. “Being an animal welfare activist, I sometimes get overwhelmed at the task at hand. The Best Friends goal to Save Them All is incredibly noble.”

Save Them All refers to Best Friends national call to action to end the killing of shelter pets across the country.

“The sad truth is that more than 9,000 dogs and cats are killed every day in U.S. shelters simply because they have no safe place to call home,” said Marc Peralta, executive director of Best Friends Animal Society – Los Angeles and NKLA (No Kill Los Angeles). “By showcasing shelter pets to such a vast national and international audience, Moby is an amazing voice for these wonderful dogs and cats. He beautifully illustrates how, as a community of animal lovers, we can work together to Save Them All.”