Image
He must have been hungry; he was found at the local Pizza Hut!
By Best Friends Animal Society

He must have been hungry; he was found at the local Pizza Hut!

Best Friends gets a lot of calls about stray, orphaned kittens. But they don’t usually have teeth like this one! This cat was found in the town of Kanab, Utah, very near Best Friends, hanging out in the parking lot of a Pizza Hut. "Mountain lions will not walk into towns unless they are desperate," said Best Friends’ wildlife rehabber, Carmen Smith. And this one was obviously desperate, indeed!

Less than a year old, not yet big enough to hunt, he was clearly orphaned and alone in the world. Starving and dehydrated, he was much too small for his age as a result. When he was spotted at the Pizza Hut, someone called the authorities, who pulled the little guy out from under a car. Next, they called Best Friends, the nearest licensed wildlife rehabilitators. And off went the rather sharp-toothed kitten to the sanctuary! 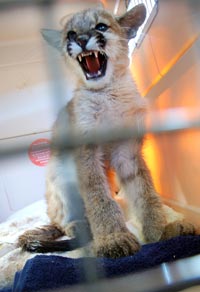 So that he will stay completely wild, no one is touching him. He’s getting fed through a trap door system to keep him appropriately wary of humans, and to keep the feeders safe. Now that he’s had plenty to drink, has been cured of a rather bad case of worms, and has been given plenty of food, he’s really perking up. He’s spritely, hissy, scary – just the way he should be! Boy, when he grows into those giant paws, look out!

Soon, this big cat will be big enough to hunt, and then he’ll be let loose to be the wild animal he was born to be … with his hungry childhood far behind him.