Image
Cat World staff use an ingenious new method to help Cowdie. It's more than a spoonful of sugar to make his medicine go down!
By Best Friends Animal Society
By David Dickson

For years now, Cowdie the cat has been perfecting his getaway shuffle. He has arthritis, especially in his back legs. Accordingly, he hasn’t exactly developed a reputation as a speedster. That all changed recently, however, once he found his newest favorite thing in the world. 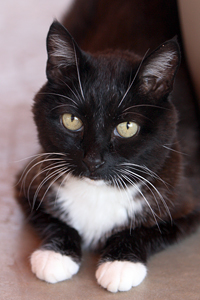 Cowdie came to Best Friends in 1999 as a 2-year-old cat when his foster family couldn’t care for him any longer. He’s incontinent, and needs to have his bladder expressed daily. Between caregivers’ needing to express his bladder or at other times give him arthritis medicine, Cowdie decided recently he was better off scuttling away from people he knew whenever they tried to approach.

Oh, he loved being petted as much as the next cat, but for him it simply wasn’t worth sticking around to find out why they were paying him a visit. Never mind his slow-motion runaways weren’t often successful!

Cowdie’s caregivers wanted to change his perspective on the matter. They became determined to find something he’d enjoy so much that he would no longer try to scurry away when they approached. This needed to be more enticing than the standard treats-and-toys routine. After a little creative brainstorming, they found something that not only won Cowdie’s undying affection, it ended up turning back the hands of time. The rather simple yet brilliant solution was this: daily walks! 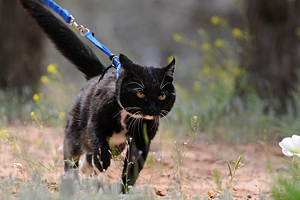 Cowdie goes for a walk

More and more cats at Best Friends are getting involved in outdoor leashed walks. Staff members and volunteers alike can take many of the Sanctuary cats outside to stroll around and chase bugs — er, take in the scenery. True, walking a cat often involves more zigging and zagging than actual trail progress, but that’s half the fun! Most of the cats enjoy it immensely.

Caregivers knew Cowdie had those stiff back legs and all, yet they still thought he’d like to explore the wilderness anyway. Boy, were they right on the money. From the beginning, Cowdie took to his walks with unmatched enthusiasm. He now sits happily when caregivers approach to put on his harness. No running away. The truly incredible part, though, is what happens once he gets outside. Yes, he still has his unique gait, but, holy smokes, you should see him chew up the trail! "The little boy moves," explains Best Friends' cat manager Michelle Warfle.

Cowdie has so much fun outside that he practically runs across the sandy landscape. Those who go out with him usually have to jog to keep up with the pace he sets. Cowdie, wearing his fashionable harness and bungee leash, often wants to head to the same place: the crest of a high bluff a ways back in the trees. From this vantage point, Cowdie earns himself an impressive view. The spot he enjoys standing on is already at a high altitude, and it drops steeply below and in front of him. This way, he gets to enjoy the same scenery as if he’d climbed up from the other side. He rather likes the effect.

One interesting detail is that Cowdie still moves slowly and deliberately when back in his play area. At this point, though, it’s easy to suspect he’s simply choosing to save his energy for the next big adventure!

Check out Cowdie if you're looking for a really special cat to call your very own. Click here to check out more adoptable cats.

to check out the many ways you can show your support for homeless animals. By giving to Best Friends, sponsoring an animal or becoming a Guardian Angel, you will help us create a time of No More Homeless Pets.