If cats had to submit letters of recommendation to be considered for adoption, Maximost, a cat who came to Best Friends not long ago, could deliver a home run with a single sentence from one of his caregivers: "He’s the easiest, most loving cat in the world!" insists Cathy Overfield. Well shoot, what else is there to say after that?

A man of distinction

Make no mistake, Maximost earns such lofty praise every minute of the day. Not many cats out there pour on affection as thick and nonstop as Maximost. For every scrap of love you give this snuggler, he heaps twice as much right back at you. "Once he starts kissing you, he doesn’t stop," says Cathy. 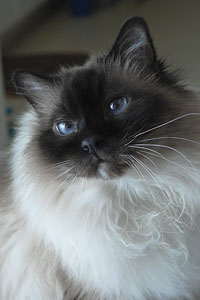 Kisses from a cat aren’t unheard of, though they usually are given in much lower quantities than Maximost likes to hand out. One of his other habits, however, is less common. "He likes to hug," explains caregiver Heather Henley. (Yes, really.) He’ll wrap his paws around whatever part of you he can reach, pulling you as close as possible for a marathon cuddle session.

This guy loves to snuggle up close and personal. Every now and again, in his enthusiasm, he’ll even grab one of his own hind legs in the hug frenzy. No worries, when that happens, he merely squeezes all the tighter and starts kissing his own foot. Safe to say, Maximost is indeed a cat who knows how to love.

As for the claim to his being the easiest cat in the world, here’s an anecdote that should chase away any other potential claimers to the title. Maximost currently requires subcutaneous fluids on a regular basis for a minor medical issue. (it’s for nothing serious).With some cats, this process can be a challenge. Others, thank goodness, are more relaxed about it. Nobody, however, is in the same league as Maximost. 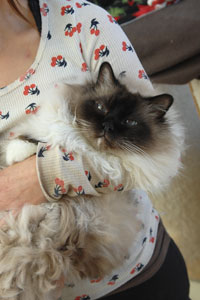 Maximost is the most handsome!

"Even when you’re giving him fluids, he just kisses you," says Heather. How’s that for a mild-mannered patient? He loves all humans, gets along great with cats and dogs, doesn’t make a fuss, and if you look up the word "handsome" in 10 different dictionaries, his face is listed in at least nine of them. (Well OK, maybe not. But it should be.)

Yet with all he has going for him, Maximost actually went through a rather scary ordeal in the past. Somebody gave him a dog’s dose of flea medication, not knowing ahead of time that doing so can actually kill a cat. Maximost became violently sick, nearly dying. He ended up living at a vet clinic for a short while, but they couldn’t keep him long-term. As luck would have it, space became available at Best Friends, so Maximost came to live at the Sanctuary.

He’s got some wobble in his walk, a result of his run-in with the flea med. Further, he’s not too keen on jumping up on high surfaces. At Best Friends, though, nobody worries about a swagger in a cat’s stride. It’s considered stylish. Otherwise he’s in good health. And as for Maximost, he doesn’t seem to mind in the least that it takes him longer to get around. "He’s so happy," says Heather. Well, really, what else would you expect from the perfect cat?

Choose a special animal to love from afar

Show a homeless cat you care by picking a special cat like Maximost to sponsor. There are many deserving and wonderful felines at the Sanctuary who would be so grateful be sponsored.