Much more than an animal cemetery

Image
Angels Rest at Best Friends Animal Sanctuary is much more than an animal cemetery. It is a sacred resting place for animals and beloved pets.
By Sandy Miller

Angels Rest is a peaceful place where the slightest breeze sends the soft music of wind chimes through the air.

A final resting place for animals

Nestled in the shadow of the red rock mountains of the Sanctuary, it is the final resting place for animals who’ve crossed over the Rainbow Bridge. It is so much more than an animal cemetery. It is the resting place not only for Sanctuary animals, but for the pets of Best Friends members, staffers and volunteers as well. 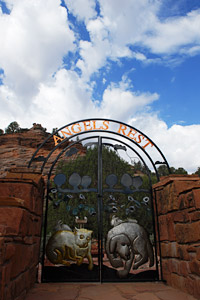 The gates at the entrance depict a dog and cat with rabbits perched on their backs, surrounded by flowers in bloom. Stones and markers bear tributes like, "Always in our hearts," "the best wee cat in the whole wide world," and other loving sentiments.

"Angels Rest is a very special place," says John Sichta, Angels Rest senior caretaker who conducts the memorial services at the placements and blessings. "It has a spirit. It has a joy."

Sichta has watched the reactions of people on the Best Friends tours when they step into Angels Rest for the first time. Inevitably, tears well up in their eyes.

The placements and blessings are not only a time for mourning the loss of a pet, they’re a time for celebrating their lives.

"Blessings and placements are a time to mourn their loss, but it’s also a time to remember them - their uniqueness - and to ultimately celebrate their companionship, and what they meant in our lives," Sichta says. "Many of these animals were 10, 12, 14, and 18 years old and they’ve been through life changes with them – divorce, loss. These animals sometimes have been more a part of their lives than close friends or family."

Monthly blessing for animals who have died 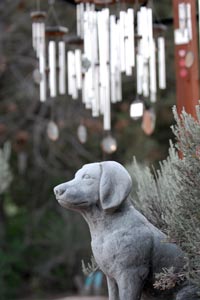 Each month, a blessing is held at Angels Rest for all of the Sanctuary animals who passed during that month. It allows Best Friends caregivers an opportunity to remember and pay tribute to these animals they’ve cared for and come to love. Other Best Friends staffers, as well as volunteers and visitors, attend the monthly blessings.

Sichta gives people the opportunity to talk about the loss of their own pets during the ceremonies. Often, a visitor will talk about a pet they’d lost years before and how they are still grieving.

"When you feel like you’re alone out there, the loss is more difficult to get over," Sichta says. "When they realize they’re not alone, the healing process begins."

September’s blessing, to be held Sept. 30, will be unique in that it will be the first time ever that Best Friends members’ tributes to their own pets will be included in the monthly blessing. Their tributes will be displayed throughout Angels Rest. The entire ceremony will be videotaped and posted on the Best Friends website on Oct. 8.

"This is a way to acknowledge everybody and make them part of the blessing," says Natania Leclerc, Best Friends’ outbound appeals manager. "There’s a lot of joy in having an animal in your life, but there’s also a lot of pain when you lose them. We wanted to give Best Friends members an opportunity to participate in this special blessing."