Sunshine Girl didn’t know exactly what to make of the magical contraption that always seemed to have treats at the bottom of it, but she decided in no time flat that it must be something wonderful! What some people call a basket muzzle, Sunshine Girl calls the mystical portal to never-ending treats. It’s all in the perception!

A dog who doesn't get along with other dogs

Years ago, when Sunshine Girl came to Best Friends she had a reputation for not getting along with other dogs. As such, she lived in her own play area. Recently, however, she switched locations at the Sanctuary and became a kitchen dog in Dulcie’s, one of the dog buildings at Best Friends. She still lives alone as a kitchen dog, but now she gets to see more faces — human and canine alike — on a regular basis. Her new building happens to be right next to Dogtown Headquarters, a heavy traffic area.

Kathy Gray, a caregiver at Dulcie’s, wanted to help Sunshine Girl find a way to get along better with other dogs. She knew that if Sunshine Girl could clear that particular hurdle, she’d have a much better shot at finding a home. Accordingly, Kathy selected Sunshine Girl as her project dog. Best Friends dog trainer Whitney Jones helped Kathy every step of the way. 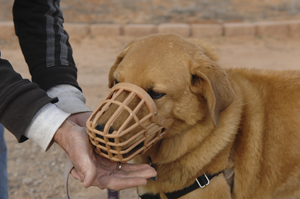 Introducing dog to a muzzle

The first order of business in teaching Sunshine Girl to interact safely with other dogs was to introduce her to a muzzle. To start that process, the first task was helping Sunshine Girl associate only positive things with the basket muzzle (a muzzle with an opening at the bottom so she can accept treats). Kathy and Whitney began by putting treats in the bottom of the muzzle, without asking Sunshine Girl to wear it. Thoroughly impressed with the treat-generating apparatus, Sunshine Girl did her part in making the goodies disappear!

Next, Sunshine Girl wore the muzzle and received treats through the bottom. One treat in particular got Sunshine Girl’s rapt attention. "Pepperoni was her big thing," Whitney says.

Wearing the muzzle around other dogs

Over the next several weeks, Sunshine Girl grew confident enough to try being around other dogs from a distance. Whitney and Kathy chose a slightly elevated area of land right outside the staff room at Dogtown Headquarters. In this particular spot, lots of people walk by fairly close on the road below without actually coming in reach. So it was safe. Also, if Sunshine Girl began reacting beyond what Whitney and Kathy wanted, they could make a quick dart into the staff room to calm her. The whole point of these sessions was to reward Sunshine Girl with a treat when she observed other dogs calmly.

During one of the early sessions at this spot, Kathy and Whitney could tell the hard work was paying off. Kathy remembers the moment well when Sunshine Girl started making sense of everything. "She just kind of glanced over at a dog and looked right back at us like, ‘Where’s my treat’?" Kathy says. "It made me realize that she got it!"

Sunshine Girl kept improving from there. "We worked on focus, having her watch us for the food," Whitney says. These sessions continued, and Sunshine Girl kept right on doing what she was supposed to. Little by little, she learned to accept other dogs in her world and not react when they came near. 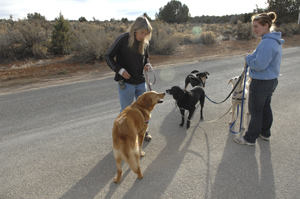 The next step was to go for a walk near other dogs. Whitney’s personal dog Chevy, an absolute pro at being relaxed around other dogs, got picked for the job. Chevy is 13 years old and as laid-back as they come. The walk was spectacularly uneventful. "She did great that first walk," Whitney explains. Sunshine Girl wore her muzzle, but that was no big deal to her because she’d been wearing it for walks already. And anyway since that mystical device always seemed to mean goodies were right around the corner, she didn’t mind it one bit.

Next, they added a second mellow and confident dog. Sunshine Girl was able to walk with two other dogs, and still do great. One other time they tried bringing a different dog who is perfectly well mannered but also a bit excitable. The new dog barked his enthusiasm along the trail, which didn’t exactly impress Sunshine Girl. Still, it was no big deal. Whitney and Kathy simply tried a different dog the next time. Over time, Sunshine Girl improved more and more around other dogs.

"She’s doing really well," Whitney explains. "Her skills have improved so much." Case in point, Sunshine Girl can now go for walks with other dogs without wearing a muzzle. Wow!

Now that Sunshine Girl has proved she can get along with other dogs, everybody is rallying more than ever for her to find a home! "She’s really come a long way from where she started," Kathy says. "I’m just really proud of her."

Do you have a dog with an aggression problem or other issue? Read advice from Best Friends animal behavior consultant Sherry Woodard on how to manage a dog with behavior challenges.