Image
Volunteering at the Sanctuary has ‘transformational effects' for a criminology professor at the University of North Florida.
By Christelle L. Del Prete

Best Friends Animal Sanctuary is much more than a place where animal lovers go to work and play. There’s a certain magic in the air and in those unforgettable moments when someone makes a heartfelt connection with a rescued dog, cat, bird, bunny or barnyard animal.

The Sanctuary, in Kanab, Utah, is nestled between the sprawling red rocks of Grand Canyon, Bryce Canyon and Zion national parks. But above all, it is an animal lover’s paradise. People come from all over the country and the world to volunteer with the animals at Best Friends, and we’ve caught up with a few of them for a chance to share their stories and experiences from the heart.

Once Jennifer Wesely, from Jacksonville Beach, Florida, experienced the Sanctuary for herself, she knew she would have to return as often as she could. The university professor was so inspired that she has also designed a course that will bring students to Best Friends next summer. In the following interview, Jennifer tells us what she loved most about the time she spent at Best Friends.

For the past two summers, I have volunteered at Dogtown, Cat World and Horse Haven. 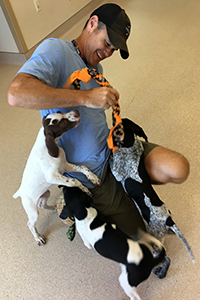 I am a criminology professor at the University of North Florida, and when I heard about Best Friends I had recently begun conducting research with the TAILS (Teaching Animals and Inmates Life Skills) program in Jacksonville. TAILS pairs incarcerated men in local correctional facilities with rescued dogs from local shelters, and the inmates live with and obedience-train the dogs, making them more likely to be adopted.

I have always been a supporter of animal welfare and intrigued by the animal-human bond. TAILS is one example of how the lives of humans and animals are deeply impacted by one another. TAILS has received support from Best Friends, and the more I heard about Best Friends, the more thrilled I became about the idea of visiting. I planned a month-long trip for June 2017, and to add more adventure to the mix I decided to drive from Florida with my furry canine companion, Minka (it took us about four days). My husband Kevin flew out for about a week and joined me, which was a great experience for him, too.

What made you want to come back?

After spending a month at Best Friends in the summer of 2017, I knew I had to return as frequently as possible. I am certain I am not alone in experiencing the transformational effects of volunteering at Best Friends, in terms of both the beautiful environment and interaction with the animals.

Volunteer at the Sanctuary or near you 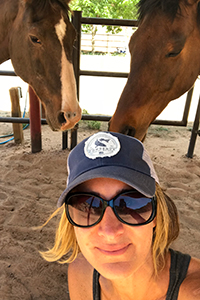 I began to brainstorm about how to create a university class that would incorporate students traveling to Kanab with me and becoming involved with Best Friends. Over the past year, I worked to arrange this trip. I created a proposal for a course called "The Role of Canines in Inmate Rehabilitation" and submitted it for a funding opportunity at my university, which I was fortunate to receive. The funding will subsidize student costs to spend 10 days working with the Canines with Careers program at Best Friends and reflecting on the rehabilitative potential of animals during summer 2019. Students will also work with the TAILS program in Jacksonville as part of the course.

On the personal side, my husband and I visited again for eight days during the summer of 2018, and I volunteered with dogs, cats and horses. I also had the opportunity to meet with some Best Friends staff about the organization of the summer 2019 course.

With dogs and cats, my role was mostly socialization, cleaning and feeding. With horses, I spent a lot of time grooming them, and I helped muck the pastures.

I love all my volunteer jobs. Perhaps the most rewarding is working with dogs at Dogtown, who, because of medical and behavioral challenges, don't get as many visitors or volunteers as others. I feel like when I walk these dogs or clean their rooms and yards I am meaningfully contributing to their care. Our visit this summer was the first time we tried doggie sleepovers, and I would have to say that this was one of my favorite activities thus far.

Take an adoptable pet on a sleepover 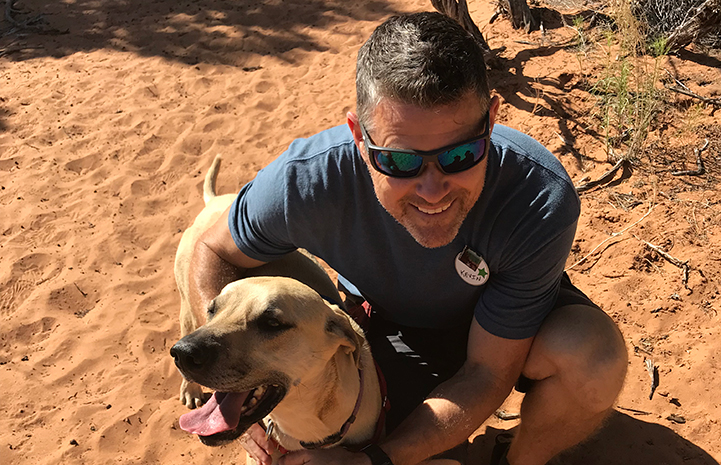 Gandhi said, "The greatness of a nation and its moral progress can be judged by the way its animals are treated." I feel strongly that we have a social responsibility toward all living creatures, human and animal. I volunteer at my local humane society as well, and sometimes I hear people say, "Oh, I couldn't do that. I would be in tears every day," or "I'd want to take them all home." Our discomfort in facing emotionally difficult situations like the suffering of humans or animals means that instead of confronting these realities, we do nothing, which only perpetuates the problem. I want to do something, even if it is small in a positive direction. That is why I volunteer. Of course, I also feel immensely rewarded through connecting with animals. 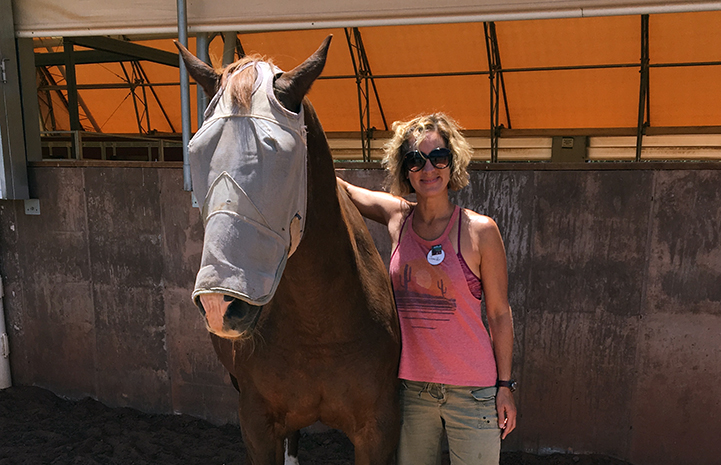 Tell us about your favorite volunteer moment: Was there a favorite animal you met or worked with?

I found it rewarding to interact with Chester, a senior horse that I groomed during my 2017 and 2018 visits. I know from his caregivers that he is just sporadically responsive to volunteer overtures. I would not blame him for wanting some alone time, because he was used as a riding horse for most of his life, carrying tourists on the trails in and around Zion National Park. Both times I volunteered at Horse Haven, he let me groom him with the deshedding tool and the brush. I spoke to him and convinced him to pose for a photo with me.

The doggie sleepovers were also extremely rewarding. This year we took home Jarvis one night, and Moqui another. They were both super sweet and loving and very good boys. I was particularly proud of Moqui, who goes on sleepovers less frequently. At first, he lay by the front door where we were staying, but over time came and cuddled with us. He did very well on an evening walk. I really hope that both Jarvis and Moqui can find their forever homes soon. They will make their human families very happy! 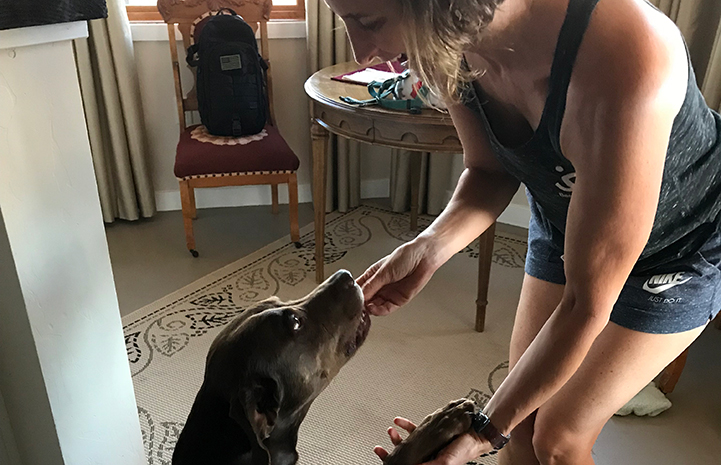 Emotionally speaking, I most value those moments when I can make a connection with an animal. Practically speaking, I find it rewarding to feel like I alleviated some of the workload for the caregivers, like cleaning the animals' rooms, feeding them or somehow making a particular animal more comfortable and happy.

Saying goodbye to the sleepover dogs was a bummer, but I'm monitoring them online and crossing fingers for their adoptions into happy homes!

Can’t volunteer? Donate to Save Them All. 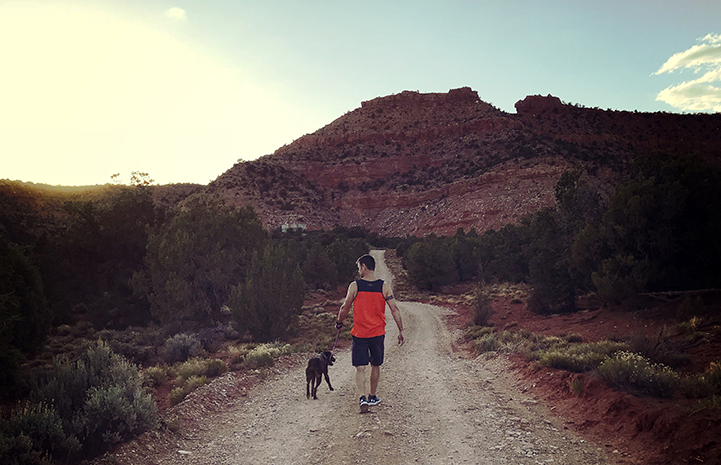