Neglected horse gets nourishment and nurturing

Image
Red the horse is carefully monitored during re-feeding process at the Sanctuary.
By Christelle L. Del Prete

By the time Red came to Best Friends, he was in terrible shape. His people had financial problems and weren't feeding him properly or caring for him at all. The case was so severe that a local sheriff intervened and persuaded them to relinquish Red, and he found his way to Best Friends. 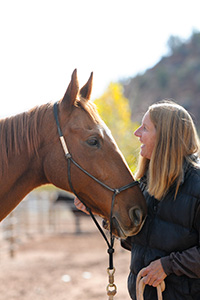 Ronnie Walters, a team lead in Horse Haven, says that Red's condition was dire. Not only was he extremely underweight, but he was also at the bottom of the scale on the horse body scoring system. The system evaluates how much muscle and fat are on a horse's neck, withers, shoulders, ribs, loin, and at the top of the tail. On a scale of one to nine, where nine is extremely obese, four to six is optimal body weight, and one is near death, Red scored about a one and a half to two when he first came to the Sanctuary. And that was cause for great concern.

A horse in that condition is very difficult to re-feed, which is the term that is used to mean restarting a severely malnourished horse on food. In the beginning stages especially, the amount and type of food Red received had to be very closely and carefully monitored, so that he would not get re-feeding syndrome - which is when the body gets overwhelmed with calories, goes into shock, and starts shutting down. Ronnie says that often the re-feeding process begins with timothy hay, which is nutritious yet easily digestible. So she and the other caregivers began feeding it to Red, hoping his system could handle it. But even that proved to be too much for him in his fragile state.

On the fourth day of re-feeding, Red got colic, and Best Friends veterinarian Dr. Tara Timpson rushed in to give him IV fluids and electrolytes. Once he was stabilized, and feeling better, the Horse Haven staff began the process all over again, sometimes giving him only one flake of hay at a time, and closely monitoring his water intake. But during Red's second week at the Sanctuary, he got synchronous diaphragmatic spasms. The condition, commonly referred to as "thumps," results from an electrolyte imbalance and causes the horse to hiccup and gasp for air. 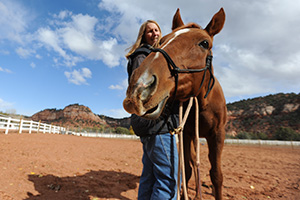 His frightened caregivers again called in Dr. Tara, who prescribed a bucket of electrolyte water. Red drank one that day, and another the next, and then he got back on track. His caregivers began adding alfalfa to his diet, because it is high in calcium and other nutrients, and Red seemed to prefer it over the timothy hay. They didn't just want him to eat again; they wanted him to enjoy his food.

Red now has a large bucket of hay and alfalfa, as well as a big hay net to nibble on. Allowing him constant access to food isn't just beneficial while he is regaining weight. Ronnie explains that horses are constant grazers. They can eat anywhere from 10 to 14 hours per day. Eating so often keeps them from getting bored, and it is better for their digestive system than the two standard meals per day that most domesticated horses get.

Red is still very thin, but now, after a month of intensive care at the Sanctuary, he is starting to fill out and recover from his trauma. Though Ronnie cautions that Red won't be entirely out of the re-feeding woods for another couple of weeks, and that she and the other caregivers are still watching him very closely, there shouldn't be any lingering issues once he gets through the process. And, as he is getting stronger physically, he is beginning to show more and more personality - or "Horsenality," as it is called in Parelli Natural Horsemanship, a system of training that caregivers use at the Sanctuary.

"He's very left-brained," Ronnie says, "and probably an extrovert. We are excited to have him, and he will be a great addition to any pasture." He's also very well adjusted for all he has been through, Ronnie adds. "He's just a really mellow, neat horse."

Get more information on caring for horses. Visit the Best Friends resource library.