Neko Case pledges to join Best Friends to Save Them All

Although Neko Case's music defies genre or classification, there is one label she proudly displays: animal advocate. So it's fitting that Neko, two-time Grammy Award-nominated artist and longtime Best Friends Animal Society supporter and Best Friends Acclaimed Ambassador, would lend her voice to urge her fans and beyond to take the pledge to Save Them All in a new public service announcement (PSA). The unifying call to action from Best Friends - Save Them All - is in direct response to the fact that every day, more than 9,000 dogs and cats are killed in America's shelters simply because they don't have a safe place to call home.

Neko Case spreading the Save Them All message 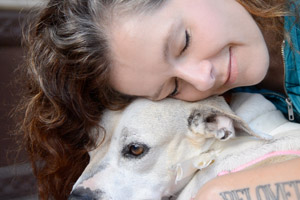 Neko, with the generous support of her record label, Anti-, is upping the ante to help the animals. The label's support and love of their artists is reflected in their credo, "Real artists creating records on their own terms," and in this case, they are supporting the cause that is near and dear to Neko's heart. Anti- is generously donating $5 every time the PSA is shared, up to $10,000.

Anti- has also gone the extra mile by striking up a partnership with Pandora Internet Radio as a third-party partner to offer a sneak peak of Neko's new album prior to its official release. So along with promoting Neko's new work, the incredibly popular Pandora will also be promoting the PSA, which will encourage their audience to help spread the word.

All this is in tandem with the release of the artist's new record, "The Worse Things Get, The Harder I Fight, The Harder I Fight, The More I Love You." This is her first album since "Middle Cyclone" debuted at number three on the Billboard charts in its first week of release; that same album was rated number-one album of the year in 2009 by Amazon.com. Neko's upcoming concert tour will also feature the PSA during the pre-show in select venues as the audience arrives, and will have Best Friends volunteers distributing information on how her fans can get involved with local rescue groups and more. The sought-after singer also shared her love of Best Friends in an article in Billboard magazine on July 2.

Our members, supporters and extended family may remember Neko from our 25th anniversary campaign. She contributed a song to the 25th anniversary CD, made donations via her record label, and also recorded her first PSA with us. In 2010, she was one of the esteemed celebrity ambassadors for our participation in Oprah's Live Your Best Life anniversary walk and celebration in New York City. Neko has also visited and volunteered at Best Friends Animal Sanctuary. Her work for the animals is music to our ears.

Join Neko and show your commitment to helping animals in need. Text SAVE to 27722 to take the pledge to help Save Them All.

Best Friends Animal Society wishes to thank all of our celebrity supporters for caring about and advocating for the animals.