Image
Neonatal kitten foster program in Los Angeles save some of the most at-risk pets in shelters. Foster homes provide hands-on care to neonate kittens.
By Best Friends staff 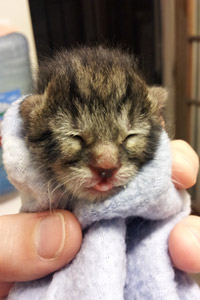 Ever heard of a kitten burrito? Perhaps not, unless you’ve joined the ranks of kitten foster parents. But it’s a simple process to make one. First, place your tiny, squirming foster kitten on a towel, then wrap like a burrito, leaving the kitten’s face peeking out, and voilà! Kitten burrito. It’s more than a party trick; the method is an essential step in bottle-feeding very young (neonate) kittens, and it’s part of Best Friends’ campaign to take the city of Los Angeles to no-kill.

Kittens made up 7,000 of the approximately 17,000 healthy or adoptable dogs and cats who died in Los Angeles city shelters in 2011. The reason? They were too small to be spayed or neutered, which means they couldn’t be placed up for adoption. Candi Crawford, outreach programs manager, says, "When plans for the Best Friends Animal Society Pet Adoption and Spay/Neuter Center and No-Kill Los Angeles (NKLA) were being created, we knew that addressing this issue was going to be a big piece of what was needed for L.A. to be a no-kill city." They needed a program that would save, house and care for kittens until they reached that magic weight of two pounds. So they gathered supplies, recruited foster homes and got to work.

Candi says, "We have 75 kittens in the program right now." And they just keep on coming. She adds, "We have litters of kittens with moms and without moms; sometimes we have single kittens with no mom. This summer, we’ve taken in as many as 20 to 30 kittens at a time."

Sheri Stachowski is now a veteran kitten fosterer after successfully growing up three litters of kittens. A self-proclaimed dog person, she wanted to help but couldn’t take in any additional dogs due to her current pack of two. But kittens? She could take in kittens.

Sheri says that while caring for kittens is definitely work, "it’s not hard work, and it’s rewarding work. In the scheme of things, it doesn’t take that much time out of your day." 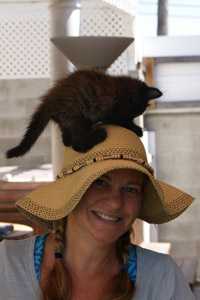 Sheri with one of her foster kittens

Because her kittens are old enough to eat on their own, the workload includes cleaning up after, feeding, and playing with them until they reach two pounds, and then bringing them back to be spayed or neutered and adopted.

Sheri downplays her efforts, saying, "I’m not really doing that much." But then she adds, "I have to remember that every bit adds up to be a really big deal. This is the bit that I can do." And it does add up to something bigger — even when the lives at stake are teeny tiny.

When very young kittens come in without a mother, they need an extra-special foster home. Michael Moran, a police officer by day and kitten bottle-feeder by night, says that his foray into helping the adoption center staff began when he attended the fostering class and went home with two 10-day-old kittens. They easily fit in the palm of his hand, weighing about five ounces each. Michael says, "They were pretty small and helpless. How could I say no to that?"

Because the girls, whom Michael named Amy and Aldonza, were so small when he brought them home, Michael and his partner, Larry, had several weeks of kitten burritos and bottle-feeding ahead of them. He even got clearance to bring the kittens with him to work if needed. "Everyone at the station is OK with it and even offered to help," he says.

Now the girls are nearly two pounds, healthy, eating on their own, and "running amok in the house," Michael reports. Soon, they can go back to the adoption center, where they will be made available for someone to fall in love with and adopt. Michael says he will be sad to see them go, but adds, "It’s been a real pleasure. I’m happy to be able to do anything, and someone’s going to get some great kittens."

Saving kittens one at a time

To date, over 200 kittens have been saved through the program.

Candi says, "The hardest part about animal welfare is knowing that healthy, adorable animals are killed because they’re too young. The best thing about this program is that we’ve saved so many kittens already with it."

And behind each life saved is a volunteer foster parent who housed, cared for, and watched the kitten grow. Now the biggest need is recruiting more heroes just like them.

Candi says, "Any amount of time people can give, we’ll take it."