Never too late for a second chance

Many dogs spend months in shelters hoping to find a forever home. Amy was in and out of shelters for years. Although she enjoyed a few brief stints in foster homes, she had difficulty finding a forever family. Even so, shelter staff didn’t give up on her. When Amy arrived at the Sanctuary as a 10-year-old senior dog, she was welcomed at Old Friends, a section of Dogtown reserved especially for older dogs. But she soon made it clear she wasn’t ready for retirement yet. 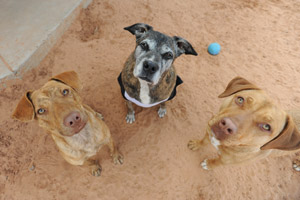 Amy was so excited about arriving at the Sanctuary, the last thing she wanted to do was lie around all day, which is a favorite activity for the residents at Old Friends. Hoping to strike up a game with dogs in the adjacent run, Amy would sprint up and down the fence. Or, she’d try playing with her roommates, but her senior pals weren’t feeling it. Caregivers knew Amy needed more active playmates, and that her buddies at Old Friends would probably wish her a fond farewell so they could get back to napping. So Amy moved out of Old Friends and went to live with dogs who would be a better match for her activity level.

She may have ended up getting a little more than she bargained for: two rambunctious pups, Simon and Sweet Pea. But, rather than getting annoyed with their puppy antics, as many mature dogs would, Amy immediately joined in their fun and games. When she’s not running and playing with them in the large yard, she’s close by – often sprawled out on the patio, or on her Kuranda bed, watching their roughhousing.

Best of all, Amy has become a mother figure and role model for the pups. She’s easygoing and patient with them when they squeeze their wiggly bodies in between her and caregivers and volunteers, trying to steal as much attention as they can. But she doesn’t hesitate to bark for extra attention if she feels she’s not getting her fair share. Her calm, gentle confidence has helped Simon and Sweet Pea, who had been quite timid, blossom into social butterflies. 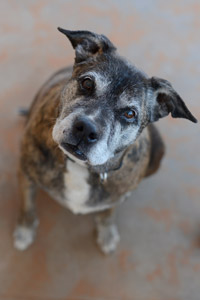 Despite her exuberance, Amy isn’t the Energizer bunny. Too spunky for Old Friends, she still needs a little extra rest as a senior girl. She’s also undergoing treatment for a tumor, which caregivers keep covered with a T-shirt (a Best Friends logo shirt, of course). And, despite being rough-and-tumble puppies, Simon and Sweet Pea seem to understand that her T-shirts serve an important purpose, and they are careful not to tear them with their rough play. And Amy is a model patient. She sits very still with a smile on her face while caregivers change her shirt several times a day.

After waiting in a shelter for much of her life, this sweet-natured girl isn’t about to let her age or health get her down or stop her from living life to the fullest. Now her days are filled with playtime with her exuberant roommates and walks and outings with volunteers. She’s come a long way from life in a shelter, and she seems to want to enjoy every minute of it. Sometimes she likes to just sit on a bench outside of her octagon, licking volunteers’ faces as she soaks up the sun.

Learn more about all the adoptable animals at Best Friends.