A popular Katrina dog is very much at home in Florida

Red, a partially paralyzed pit bull rescued after Hurricane Katrina, acts anything but like a disabled dog these days.

On a recent Saturday, Diane McDermott, who adopted Red last year, took him to a well-attended walk-a-thon in West Palm Beach. "He loved it," she said.

She put a big sign on the back of his cart that read, KATRINA: LOUISIANA RED.

"People had their pictures taken with him," Diane said. "It was a really good time for him. They wanted to know his story. I told them all about Best Friends and how they rescued him. One woman started crying. I told her, ‘Don’t cry for Red. He has a great life now.’ " 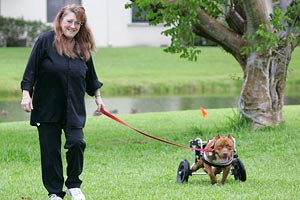 Life for Red includes regular rinses to keep his skin clean, playing ball several times a day with Diane, both in the house and in her back yard, belly-belt changes often because Red is mostly incontinent, and daily walks around the neighborhood in one of his three carts, one of which Diane calls his "racing car."

He's graduated from a purple squeaky toy he treated like a baby to playing fetch with tennis balls. "If I bounce the ball, he bops up and catches it in his mouth. He’s too funny," she said. "He still likes his squeaky toys, but he loves playing ball."

Diane consulted with a Best Friends’ trainer to work out some behavior issues Red was displaying. "He’s doing really good now," she said. "He’s so smart. I had to give him a timeout a couple of times and that was what he needed. He knows that I’m the parent and that he isn’t in charge."

Physically, Red has improved as well. He wags his tail these days too. After he was hit by a car, his tail no longer wagged because of a spinal injury. He has gone from weighing 40-some pounds when rescued from a New Orleans yard to a little more than 60.

She recently took him to her vet, who often tells her Red is a miracle dog. He got a clean bill of health, including no signs of mange, which Red battled for a while, off and on.

Diane, who lives in Boynton Beach, Florida, learned about Red when she saw a story about him on CNN. At the time, he was in foster care in Texas. A few weeks later, Diane picked him up and drove him home to Florida.

And life couldn't be better, Diane said: "He likes to roll on his back and flip his back legs back and forth. He wags his tail a lot more. The nerves are better. He's muscular now.

"He seems like a very different dog. He is doing so well. He's happy."