New and improved area for pigs at the Sanctuary 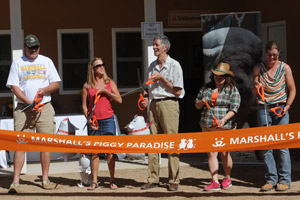 On Friday, June 14, Best Friends celebrated the grand opening of the new building at Marshall's Piggy Paradise. Major Best Friends supporters David and Donna Marshall attended the event, along with Best Friends CEO Gregory Castle, several co-founders, many staff members, and a few of the Piggy Paradise residents themselves.

Armed with giant pairs of scissors, Gregory Castle, the Marshalls, donor/volunteer Chrissy Rollyson, and Jen Reid, manager of Horse Haven and Piggy Paradise, lined up for the ribbon-cutting ceremony. Pig caregiver Susan Kesling says she was thrilled by the turnout at the event and how genuinely excited people seemed to be about this new chapter in Piggy Paradise history.

The new building is designed to boost both the efficiency and quality of animal care for Piggy Paradise residents. First and foremost, it provides a medical area for the pigs and smaller hooved animals, like goats and ponies, so they do not have to undergo the stress of being transported all the way up to the clinic (a distance of several miles from lower to upper canyon) for routine medical care.

And caregivers have a wonderful new kitchen in which to prepare nutritious meals for the pigs. The kitchen even features a walk-in cooler - the value and utility of which cannot be underestimated. Before this addition, all of the pigs' food had to be stored miles away in the refrigeration units at the Village Cafe, or in a very well air-conditioned (Piggy Paradise) office.

Visitors and volunteers will benefit as well, as the new reception room provides a comfortable area for them to watch the orientation video and the invaluable convenience of their own restroom.

Better digs for the pigs 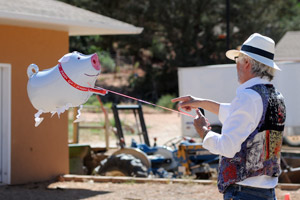 Of course, the pigs themselves are also enjoying key improvements to their own digs. Their living areas have been upgraded and expanded, and they are now able to live communally. In nature, pigs live in communities, called sounders, so domesticated pigs do best if they can cohabitate with their piggy pals. Approximately 15 pigs are now enjoying each other's company, and so far everybody seems to be getting along just fine.

The group living situation makes it easier, and far less time-consuming, for caregivers to provide essentials, such as water and mud holes, for groups of pigs rather than for each individual one. Therefore, caregivers can spend less time on preparatory and clean-up tasks and more time interacting with the pigs themselves.

Marshall's Piggy Paradise now bears the name of the couple whose generosity made it all possible. Best Friends co-founder Anne Mejia describes the Marshalls as "remarkably kind folks with an incredible love for animals of all species."

Thanks to the continuing support of people like the Marshalls, and Best Friends members everywhere, Piggy Paradise isn't the only place getting a facelift. There's a new state-of-the-art clinic currently being built that will more efficiently meet the needs of the patients, the veterinary staff, and the community. Key features include a private room for community (feral) cats who are brought in for spaying and neutering, a high-tech laboratory for critical blood work, and improved recovery rooms for the animals.

And a nearly-completed building at the Bunny House will provide some much-needed storage space, as well as a volunteer and visitor area like the one at Marshall's Piggy Paradise, and of course, more living space for the rabbits (room for approximately 36 of them).

With all of the improvements, it's an exciting time to be at the Sanctuary, no matter what species you belong to.