A cat called Monroe and a Chihuahua named Kringle now have new digs. They are among the first 50 arrivals at Best Friends Pet Adoption and Spay/Neuter Services in the Mission Hills area of Los Angeles. The doors to the shelter are set to open to the public on Saturday, January 28. 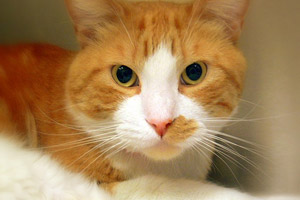 Monroe and Kringle, who were transferred to the facility from Los Angeles city shelters, came as a result of Best Friends’ agreement with the city to run the facility. It was built in 2008 but never opened to the public because of a shortage of funds.

But that was then and this is now. Today, the building is outfitted as a state-of-the-art adoption facility that will also provide affordable spay/neuter services for area residents. And Best Friends volunteers and staff have been busy readying the shelter for its new animal residents, who will be brought to the facility from the city’s six other shelters.

"Our local volunteers and staff have come together for an amazing, perfect storm of awesome," says Kaylee Hawkins, volunteer coordinator with L.A. programs. "In 12 hours, the kennels were deep cleaned, flowers were planted, 40-plus animals arrived, and supplies were put away." All told, about 30 people showed up to help prepare the facility for opening day, Kaylee points out.

And preparations could not have happened soon enough. Instead of six city shelters, there will now be seven. 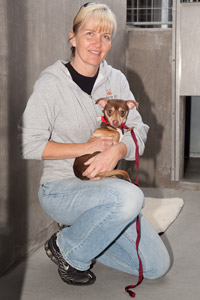 "The adoption facility will provide breathing room for the overwhelmed six city shelters by housing 100 to 200 animals at a time who are available for adoption," says Jen Woodard, manager of Best Friends' L.A. programs. "Not only are we taking in city shelter animals, but also the center will serve as a venue for dog training classes, workshops and events."

Brenda Barnett, general manager of L.A. Department of Animal Services, agrees: "We are very excited about Best Friends opening this shelter. Families will have a great place to adopt their next furry family member or to get a current pet spayed or neutered."

Now temporarily living at the new shelter, Monroe and Kringle will be available for adoption on opening day. Three-year-old Monroe, according to Best Friends coalition coordinator Destiny Haney, isn’t fond of dogs, but he gets along well with other cats.

Kringle, who’s about four years old, is a shy but charming boy who warms up quickly, says Jf Pryor, mobile adoption coordinator for Best Friends. "There is no way you can look into those little earnest eyes and spy that face without smiling."

You can learn more about Monroe, Kringle and all the new animal residents at the Best Friends Pet Adoption and Spay/Neuter Services online at Adopt a Pet.

Get real-time updates on what’s happening with Best Friends’ L.A. programs and the new Best Friends Pet Adoption and Spay/Neuter Services by following us on Facebook.