Frankie had just arrived in Utah when he met Sara Wright and her boyfriend, Tom Torode, who were at the Best Friends Pet Adoption Center in Salt Lake City to foster a small fluffy dog. But once they saw Frankie, they only had eyes for him. The couple not only fostered the big pit bull-type-terrier-like fellow, but they adopted him. That’s when Frankie’s life came full circle, because the place where he came from, combined with his blocky-headed appearance, could have gotten him killed.

Today, Frankie’s living the good life in his new home, and a dangerous policy at the shelter he came from is no longer on the books. Here’s how it all happened. 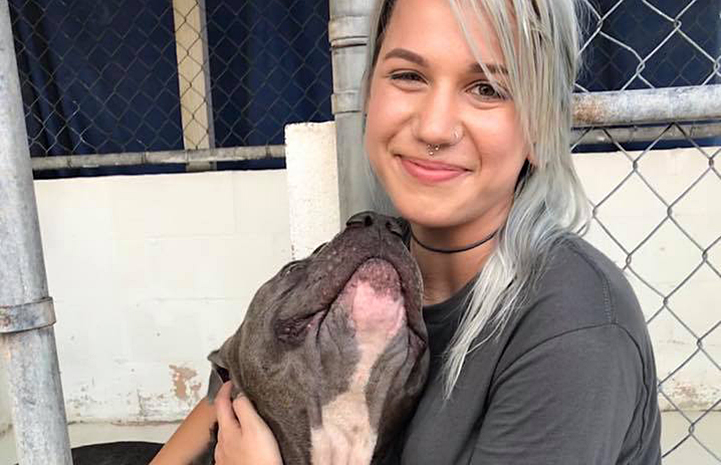 Best Friends has been working for months with Palm Valley Animal Center (PVAC) in Edinburg, Texas, because it’s one of the busiest shelters in the country. PVAC takes in around 32,000 pets every year and, unfortunately, it has the largest lifesaving gap in the state between the number of animals entering its doors and those eventually adopted. And though thousands of pets are killed there each year, the shelter’s board is eager to turn the situation around and, instead, make it a place that saves lives.

To help launch and carry out new PVAC programs, Best Friends hired two staffers in key positions. One of the first orders of business for Jay Garrett and Mike Bricker was to change the shelter’s policy against allowing people to adopt pit bull-terrier-like dogs, such as Frankie.

“If you know Mike, you know his love for pit bulls outgrows his heart,” says Jay. “He put together an amazing presentation for the board and we worked to advocate for this breed, successfully won over the votes from the board, and removed the ban.” 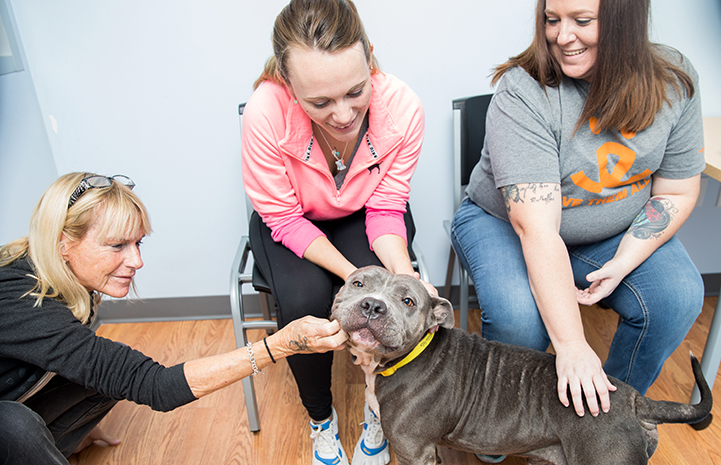 It didn’t hurt that they brought along a sweet pit bull terrier to mingle with board members during the presentation. Shelter staff were also thrilled, because so many of them count pit bull terriers as their favorites, too.

It’s lucky that Frankie arrived at the shelter after the adoption ban had been lifted. And although that meant he had a choice, PVAC remains an incredibly high-volume shelter with far too many animals coming in, which leads to heartbreaking decisions every day.

Frankie became an immediate staff favorite. He was sweet, mellow and goofy, and loved his only stuffed toy. When he started showing signs of sickness (something that, unfortunately, is all too common), he ended up on the shelter’s euthanasia list. But Lilli Aiello, the shelter’s foster coordinator, stepped in. One of Frankie’s biggest fans, she just couldn’t let him go. “And we all loved her for it,” says Jay.

Lilli took Frankie home to foster him and give him the medication he needed to get healthy again. The big, sweet dog was safe for the time being, but he still needed a forever home. That’s how Frankie managed to hitch a ride up north on a Best Friends transport to Salt Lake City. 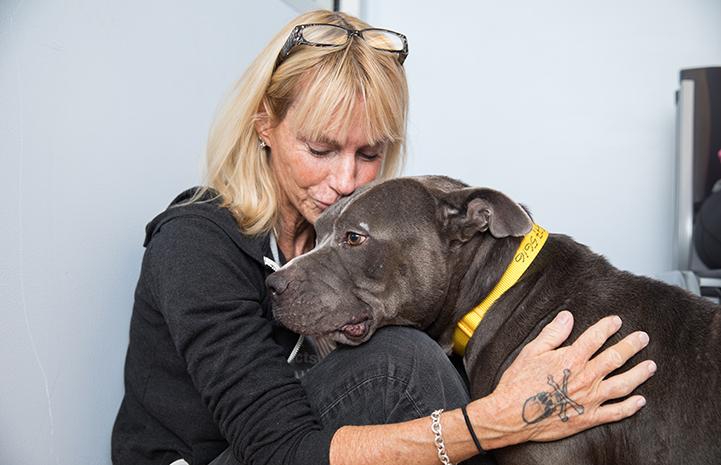 Foster mom meets the dog of her dreams

Frankie traveled to Utah with a group of 59 other dogs that became known as the Super 60. In Salt Lake City, foster families (including Sara and Tom) were waiting and ready to bring them home. The idea was to get the puppies and dogs out of Texas and into foster homes in Utah in time for the local super adoption event, which would be their best chance for adoption.

Sara and Tom signed up to foster a dog from Texas as soon as Best Friends put the call out. They learned they’d been matched with a small dog, who they were ready to take home, but as more dogs came off the van, another one caught Sara’s eye — Frankie.

“I’ve always wanted a dog who looks like Frankie,” says Sara. “He was sitting there so calm, while dogs in the kennels around him were jumping excitedly and trying to get his attention.”

Sara noticed Frankie hadn’t yet been assigned to anyone, asked about him and learned that he still needed a foster family. They also let her know that Frankie had heartworms and needed a home where he could get a little extra attention and a lot of rest during treatment.

Sara, a nurse, was up to the task. And so the little dog first assigned to the couple happily went home with another foster family, and Frankie went home with Sara and Tom.

How Best Friends is saving lives in Texas 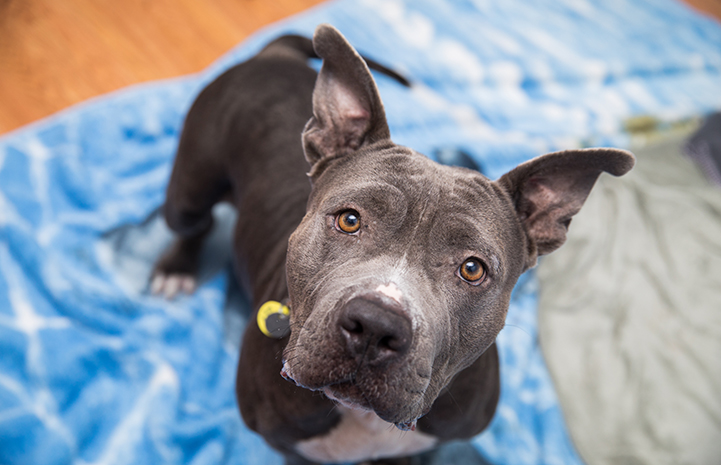 Safe and sound at home

Frankie settled in as if he’d been waiting to get there his whole life. In fact, he fit in so well from the start, that the couple wasted no time in making his adoption official. He wouldn’t be going to the adoption event after all, because he was already home. Frankie wasted no time making friends with the family bird and cat; although, the latter is still learning how to let her guard down around Frankie.

“He is so smart,” says Sara. “He knows how to sit and shake, which is his favorite command.”

Heartworm treatment requires dogs to remain calm and maintain a low activity level. A heart rate that spikes during treatment can be deadly, but Frankie has calmness in spades and that makes him a model patient. “He’s really laid-back. In fact, he doesn’t even bark,” says Sara.

Frankie also came with a few surprises, one of which is his lack of potty training. It’s possible he lived solely outdoors before coming to PVAC, which would explain why he wasn’t housetrained when he arrived at his foster home. That’s something Sara and Tom have been working hard on with him, and it’s taught them patience. “We’ve learned so much from Frankie,” says Sara. “And we’re a lot happier now that he’s in our life.”

As for Frankie, he’s happy, too. And to think, he almost missed the chance to meet a family that wanted a dog just like him — all because of an outdated shelter policy.

“Frankie is a testament to the adoptability and lovability of this breed,” says Jay. “He’s an example of the lifesaving work that we're invested in at Best Friends and PVAC, and he’s a wonderful heartfelt acknowledgment of the love and passion and care that the PVAC staff put into their daily work.”

It just goes to show that there’s a family out there for every dog. And now dogs of every breed and type at PVAC have the chance they deserve to go to a happy new home — just like Frankie.

Donate to Best Friends and save more lives like Frankie’s 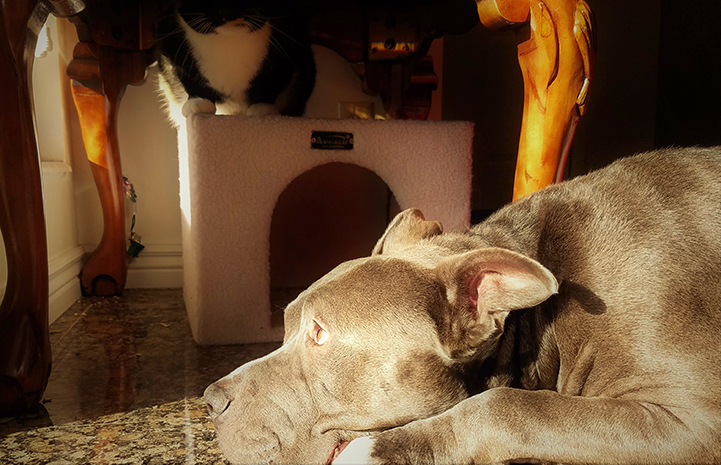