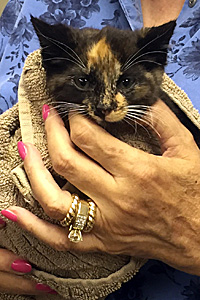 When two tiny kittens, Collins and Gigi, entered Columbus Animal Control in Columbus, Georgia, they were terrified of people. They were also hungry and prone to illness due to the stress of being in a busy shelter environment; however, the anxious siblings would soon find safe haven, because people have come together in a big way to help cats in Columbus.

Best Friends, in partnership with PetSmart Charities™, began a Community Cats Project in Columbus to help save free-roaming cats through trap/neuter/return (TNR). Adult cats brought to the shelter as strays are being saved through the program, but there were no resources to help very young (unweaned) kittens like Collins and Gigi.

When Sabine Smith-Stull, executive director at Animal Ark Rescue, learned about the launch of the Columbus Community Cats Project, she wanted to help, knowing that newborn kittens entering the animal control facility would urgently need a place to go where they could get round-the-clock care. Maybe Animal Ark Rescue could be that place — if only the funds were available to get a nursery up and running.

More help on the way

Even though Best Friends Animal Society was already doing a lot for cats in Columbus, there was still more to be done, and if Animal Ark Rescue could do it, Best Friends could help make it happen. Animal Ark Rescue was eligible for financial aid through the Best Friends No More Homeless Pets Network, a group of rescue organizations and municipal shelters across the country working to end the killing of animals in our nation’s shelters. Best Friends presented Animal Ark Rescue with a $1,000 grant to kick-start its kitten nursery and save kittens like Collins and Gigi.

With the funding from Best Friends, Animal Ark Rescue was able to quickly turn an unused area in its shelter into a sanitized pristine space for newborns. Peeling vinyl tiles were replaced with state-of-the-art flooring, and the walls were redone and sterilized. The much-needed overhaul paved the way for the community to pitch in, too. Pet lovers donated a refrigerator, microwave, scales, kitten formula and stainless steel enclosures. Within a month, a fully stocked kitten nursery was ready for kittens. 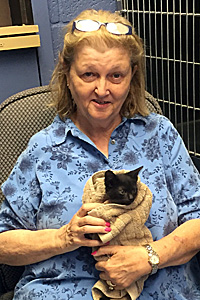 Collins and Gigi were among the first kittens to enter the nursery. There, they received the medical attention and proper nutrition they needed, as well as lots of love and time to allow them to grow into confident companions. Soon the friendly, affection-seeking kitties will be spayed or neutered, and then they’ll be ready to go home.

“The kitten nursery is helping to save all the kittens,” says Sabine. “Columbus Animal Control’s kittens are coming here to get the care they need until they are old enough to be adopted.” Since the beginning of kitten season, Animal Ark Rescue’s kitten nursery has rescued approximately 400 kittens, thanks to progressive partnerships and a little extra help from Best Friends.