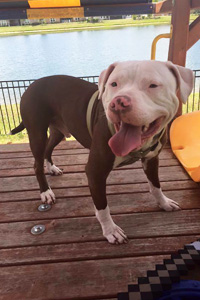 When Mary Robinson saw Bobo’s photograph on Facebook, she felt an instant connection. He’s a large brown-and-white bulldog mix with a white face accented with freckles on his pink nose and snout. “That giant head with that huge smile just beamed with expression,” says Mary, who knew she had to meet him as soon as possible. Thanks to a recent adoption policy change at St. Johns County Animal Control in St. Augustine, Florida, she would not only get to meet Bobo, she would also be able to adopt him.

Breed discrimination in some areas of Florida

For the past eight years, dogs like Bobo who were in the custody of St. Johns County Animal Control didn’t get a chance for adoption. Instead they were killed, solely based on breed. That’s because in 2007 the county implemented a no-adoption policy for pit bull terriers. However, the wheels were recently set in motion to change that policy, when a local advocate of pit bull terriers contacted Ledy VanKavage, Best Friends senior legislative attorney, to find out how Best Friends could help.

“We believed the policy was contrary to Florida state law,” says Ledy, after reviewing the situation. Florida had passed statewide legislation against breed discrimination years ago, but some areas of the state still had discriminatory policies on the books because of the way the statewide law was interpreted. And that had to change, because great dogs were being killed for no reason.

Ledy got to work gathering numerous resources and materials to send to Jerry Cameron, assistant administrator at St. Johns County. Best Friends also involved the public by sending out a legislative alert asking constituents to contact their local elected officials about the bad policy at the shelter. The goal was to share information and statistics showing that dog breed bans don’t keep communities safer, and that when it comes to adoption, the focus should be on the dog’s behavior, not the dog’s breed.

Calculate cost to taxpaxers of a breed bad for your city.

Soon, county officials agreed to meet with Best Friends and local animal advocates to discuss how a better policy could be put in place — one that would include safety measures like behavior evaluations for all dogs, regardless of breed. Once all the information was in, the county agreed to create a new and better policy. “The piece that had been missing was the temperament testing,” says Jerry. “This is a more progressive policy and we have more tools to do more things for the dogs to help make the right adoption matches.”

And with that, all dogs entering the shelter now have a fair chance of getting out — even dogs like Bobo. 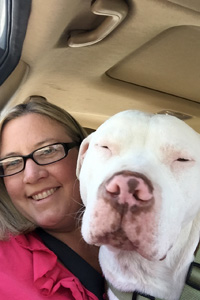 Once Mary met Bobo at the shelter, he was a shoo-in. “We saw his amazing, gentle and sweet temperament at the shelter. He was so docile yet so affectionate,” she says. Mary and her family had met many dogs while looking for just the right one, and once they got to know Bobo it was clear he was the one for them. So they brought him home, where he’s proven himself to be a model citizen and all-around sweetheart.

Bobo’s story exemplifies why Best Friends works to change policies that discriminate against any breed of dog. Now St. Johns County residents have a lot more fantastic dogs like Bobo to choose from at their local shelter. And, as Mary says, “Bobo’s great with other dogs, cats and kids. I don't think anyone can deny that a dog like that deserves the chance to bring so much happiness into a home.”

Read more about pitbull dogs and facts and myths about pits.