A new job for a blind and deaf dog

Butterscotch didn’t deserve to end up homeless in his golden years. But at 13, the sweet spaniel mix landed in a shelter. Besides being older, he was blind, deaf and had dog food allergies.

In a busy shelter, with many younger healthier dogs in need of homes, it can be a challenge for a dog like him to get adopted. So instead, Butterscotch came to the Sanctuary where being a senior with medical issues is perfectly normal. Here, Butterscotch was in good company. He was also in the perfect place to capture the heart of an adopter — one who recognized that he has special talents and that, in spite of his age, he still has a lot to give to the world. 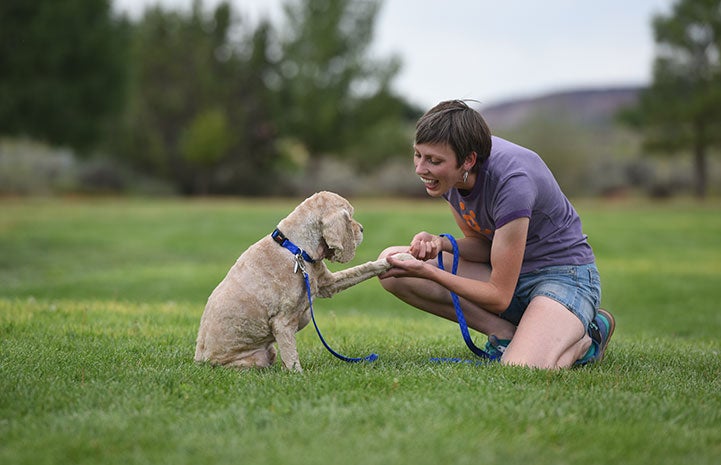 Stephanie Peters was just starting a four-month internship at Dogtown when she met Butterscotch. Although she thought it would be amazing to adopt a Sanctuary dog, she didn’t know if it would happen during her internship. She and her husband had a four-year-old rescued dog at home and were considering adding a senior dog to their family. With all the different dogs at the Sanctuary, Stephanie didn't know if or how she would find the one that was just right for her. But during her very first week in Dogtown, she met Butterscotch, who won her heart right away. “I saw him and was so smitten,” she says.

His blindness, deafness and food allergies didn’t matter. Stephanie immediately started taking Butterscotch on sleepovers. He even met Stephanie’s dog, Marmalade, and the two got along great. Then, when Stephanie saw him charm a crowd of people on the Dogtown tour, she knew he was a natural therapy dog. Butterscotch even showed Stephanie that he might be able to pick up new skills when he offered her his paw. She started working with him on basic training cues, using his sense of touch and smell to guide him. Because Butterscotch can't hear a clicker or verbal praise, Stephanie used food or a finger tap to cue him, along with a tasty treat or petting as a reward.

Because Butterscotch appreciates treats and is so eager to please, he quickly picked up on his training. There was no question that he was going home with Stephanie when she completed her internship. 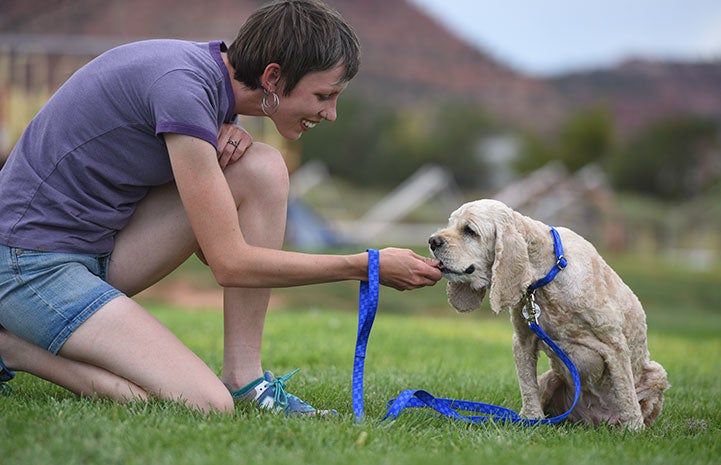 An important job for Butterscotch

Today, while Butterscotch is getting plenty of love and comfort in his golden years, he’s also got an important job to do. Since he left the Sanctuary in August, he’s continued his training and will soon be taking his Canine Good Citizen (CGC) test. And in November, after doing even more training for therapy dogs, he’ll take his therapy dog evaluation. If he passes both — which he is sure to do — Stephanie and Butterscotch will be a registered therapy dog team.

Butterscotch is 14 years old now. But if anyone asks Stephanie why she has invested so much time and training to help a senior spaniel become a therapy dog, she says: “I think there's a misconception that senior dogs should be put out to pasture, that we shouldn't ask anything of them. But they greatly benefit from training and enrichment. There is always an age-appropriate way to train, and they will let us know what they can handle. For older dogs, we need to help them strike the right balance between comfort and training and enrichment.”

Of course, it helps that Butterscotch is naturally gregarious and charming. Once he becomes a registered therapy dog, he and Stephanie will start making the rounds in Ames, Iowa, where they live. Butterscotch will visit retirement communities, elementary schools and the public library. It’s a challenge Butterscotch is happy to take on. “He’s going to love it,” Stephanie says. And he certainly deserves it.

Help more animals like Butterscotch go from homeless to home 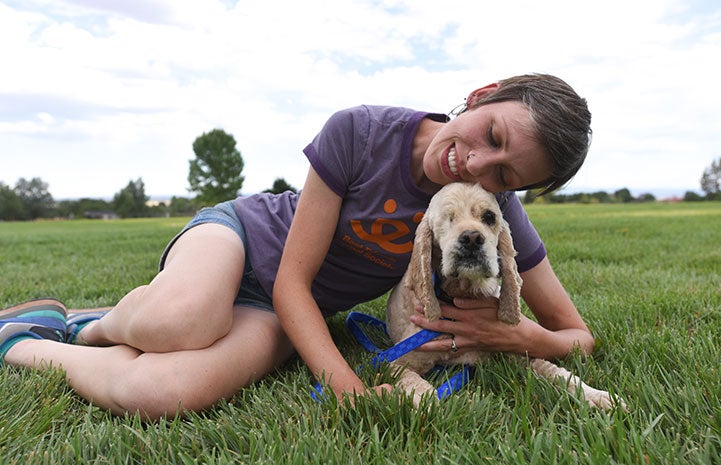