Image
People from around the tri-state area come out in droves to adopt.
By  Denise LeBeau

First-time participant Linda Vetrano, director of Posh Pets Rescue, says, "If we had adopted out one pit bull, we would have been happy. On the first day, we adopted out four." From regular super adoption participants to newcomers, everyone went home a winner.

Doubling down on adoptions 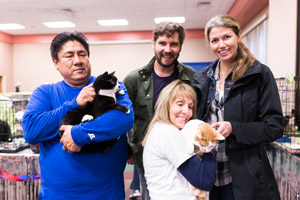 Ann Heatherington arrived at the event eager to find a cat to take home. She soon fell in love with Butter Pecan, who caught her eye because she had always wanted an orange-and-white cat. Ann was convinced that Butter Pecan was the one for her: She says, "This cat had everything I was looking for: super loving, super sweet and super chill." What she didn't realize at the time was that her partner, Clint Brandhagen, was busy following his heart and falling hard for another cat.

Ann was ready to adopt Butter Pecan, while Clint wanted to adopt Randolph, a striking black-and-white cat. Once Ann and Clint realized what was happening, they decided they'd be happy to adopt two cats. But their chosen cats didn't know each other, and were with different rescue groups - Butter Pecan from Pets Alive and Randolph from TLC Animal Rescue, Inc. They'd have to choose just one. Or would they?

While the couple debated over which cat to choose, quick-thinking staff with the two rescue groups agreed to slowly introduce the cats during the event. Butter Pecan's cage and Randolph's cage were moved next to each other, and while the human couple took a few hours to enjoy the event, the two cats slowly acclimated to one another.

At the end of the event, Butter Pecan and Randolph left, together, with their proud new parents.

Bear hugs all around 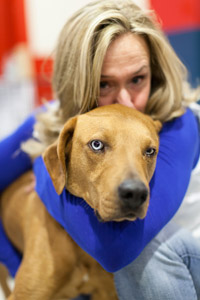 Nancy Brennan came to the event specifically to find a companion for her mother, Gail Kratch. Gail had lost her husband earlier in the year, and the house was feeling lonely." Together, she and Nancy found Bear, an adorable tan-and-white Chihuahua mix bundled in a red sweater. Gail was tickled to have found a great new friend to share walks and cuddles with.

As they were readying to leave, Nancy spied a big brown dog with unusual blue eyes. Nancy says, "We usually adopt Labradors, the potential guide dogs who don't pass the test, but we lost our last dog in February." She wasn't there to adopt a dog for her family, but she couldn't leave without the big blue-eyed dog, whose name also happened to be Bear, just like her mother Gail's new little dog. They immediately dubbed the two "Little Bear" and "Big Bear."

Since the event, Nancy e-mailed with an update to say, "Things are better than great here. (My son) Jack loves Bear as much as I do. I think Bear's prior family had a young boy, as Bear is always watching Jack just to check in. And Mom is doing great with Little Bear. There's lots of love all around."

Find the next Best Friends event in your area.