No holding back this partially paralyzed cat

Image
Cat who is partially paralyzed, with back legs that don't work quite right, gets help and care at Best Friends.
By Christelle L. Del Prete 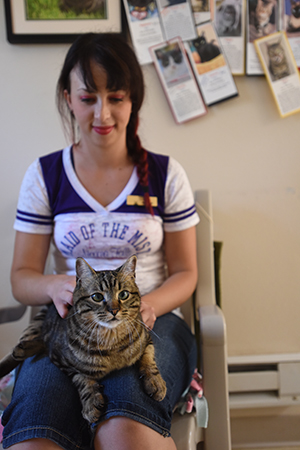 At first glance, it’s easy to underestimate Cory. After all, any cat with partially paralyzed back legs might get a free pass when it comes to speed, agility or even routine physical activity.

It’s reasonable to expect that even partial paralysis in cats could seriously impact a cat’s ability to move around as he pleases. But that’s not the case with all paralyzed cats, and it certainly isn’t the case with Cory. This is one cat who goes where he wants to go — when he wants to go there and without any cat mobility aids.

Before he came to Best Friends, the one-year-old brown tabby cat was rescued off the streets by New York City animal control. He and his siblings were found when they were just tiny little kittens. Once they went to the shelter, his brothers and sisters got scooped up quickly.

But even though Cory is handsome — with bright green eyes and striking markings in his fur — he stayed behind because of paralyzed back legs. Cory isn’t in any pain. His legs don’t bother him a bit. In fact, he acts just like any normal young cat. Still, paralyzed cat care can seem daunting to some potential adopters.

Cory also has feline immunodeficiency virus (FIV), a virus that weakens a cat’s immune system and makes him more susceptible to dental disease and other infections. Many cats with FIV can live long and healthy lives, and the chances of spreading the virus to uninfected cats is low if the cats don’t fight. (FIV is typically spread through deep bite wounds.) It was just one more thing holding Cory back from finding his forever home.

Cory was likely born with his back legs this way. When he sits down they stick straight out at a funny angle. He has no control over his hindquarters, and he needs help expressing his bladder each day, which really only means that his caregivers have to hold him still, put a hand on his soft belly area and give a gentle squeeze. He also needs daily baths to stay comfortable and clean.

But at Quincy House, the area in Cat World that houses many of the Sanctuary’s special-needs cats, Cory fits right in. Since he’s not aggressive toward other cats, he’s able to live with other partially paralyzed cats who do not have FIV. Like them, Cory is treated like a perfectly normal cat who just needs a little extra daily care. And since he’s in good company in a place where people understand his needs, he’ll have a better chance of finding just the right person to take him home and give him the love and care he needs. 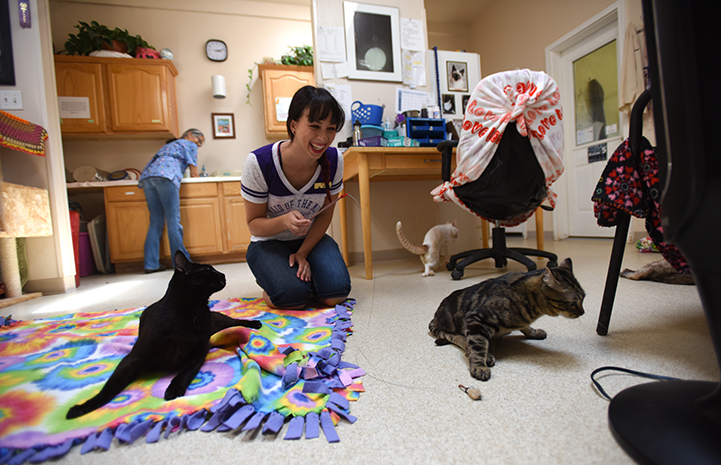 Cat paralysis can’t hold him back

In the meantime, Cory has made himself quite at home in the Quincy House lobby. And he’s proving that cat paralysis can’t hold him back. “He can go all over the place and is really fast when he wants to be,” says Cat World caregiver Felicia Fullerton.

In fact, Felicia has become one of Cory’s favorite people. Since Felicia is part of the team of people who take care of Cory and the other cats in the area, Cory gives her his undying affection. He started doing this one day after she gave him a bath and then took a few minutes to cuddle with him. That was when Cory decided she was his new best friend. He started following her around the lobby like a puppy, gazing up at her with his big green eyes.

Felicia moves fast when she’s working, but that doesn’t discourage Cory one bit. Wherever she goes, Cory is never far behind, even though he sometimes has to run to keep up with her. And when she goes into one of the other rooms, he waits by the door for her.

More than proving he can

Cory got really good at this game really quickly. He started following some of his other caregivers around when Felicia was busy in another room or out on her weekends. He’s so fast and agile that occasionally he surprises them when he suddenly appears underfoot.

Clearly, there’s nothing wrong with Cory’s speed or agility. But following his caregivers around does more for Cory than simply proving that he can. When he first came to the Sanctuary, he was a little bit shy. Now he has gained confidence and become more relaxed and outgoing with people. He’ll run right up to visitors and volunteers to say hello and welcome them to Quincy House. It’s an important job for a lobby cat.

All of the exercise has helped Cory in other ways, too. Since moving into Cat World, he’s shed some weight and has gotten into excellent shape. Now that he’s fitter and friendlier than ever, he’s less likely to be underestimated and impossible to overlook. It’s not every day you see a cat as special as Cory living life to the fullest, cruising along in the fast lane.

Help bring hope and healing to more animals like Cory 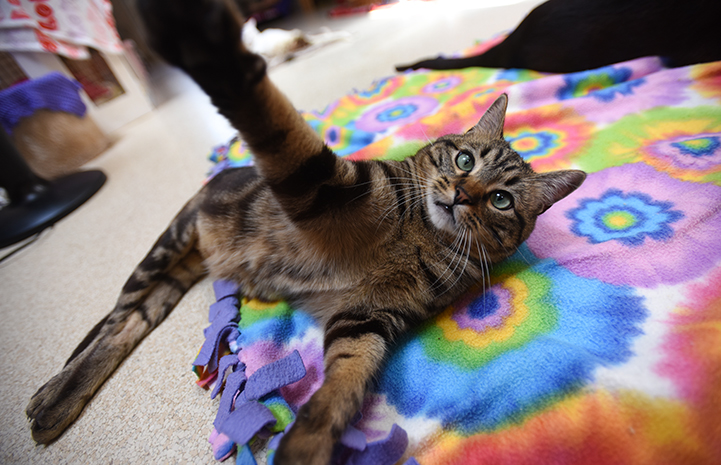