Image
Best Friends helps a Davis County Animal Care and Control, Utah animal shelter, save more dogs and cats than ever before.
By Denise LeBeau

If Beans had to go to a shelter at all, he was lucky it happened when it did. Beans is a cat living in Davis County, Utah, where last June only about 30 percent of cats who entered the shelter left alive. But it’s a new day at Davis County Animal Care and Control. With support from Best Friends and the NKUT (No-Kill Utah) Coalition (a group of organizations all working together to make Utah a no-kill state), this June, the shelter saved more than 90 percent of pets to enter its doors — including Beans. It marked the shelter’s best-ever month for saving pets.

Change began last November, when Davis County signed a no-kill proclamation and Best Friends and the NKUT Coalition began supporting the shelter more than ever. Fast forward to the June numbers, which are being touted as Davis County’s “new normal.” It was also the third month in a row that the shelter hit a 90 percent save rate (the percentage of animals who enter the shelter and leave alive). And cats like Beans are alive and thriving because of it.

Best Friends supports Davis County Animal Care and Control in several new ways, all with the goal of saving more pets in one of Utah’s most populous counties. To be successful, the shelter needed help to reduce the number of pets coming in, and to increase the number leaving alive. Arlyn Bradshaw, executive director of Best Friends–Utah, says, “The shelter has been very receptive to the programs we’ve made available, and they’re running with the resources.”

Tracy Roddom, assistant director at Davis County Animal Care and Control, says the response has been very positive for community cats. “We’ve been receiving calls and emails from citizens all over Davis County offering support,” she says. “People are excited about the program.”

Not only are fewer pets entering the shelter, more programs are in place to get them out. And to help those pets who do stay there, Best Friends supports the shelter’s adoption efforts in a few new ways. A staffing grant from Best Friends has made it possible to hire an adoption coordinator, and, as Arlyn explains, “Davis County is looking at ways to increase its adoptions. So we suggested having the shelter open on Saturdays.”

The shelter has taken all the strategies to heart. Tracy says, “We’ve began hosting Saturday adoption events and one was extremely successful, with 18 adoptions.”

All this has resulted in more pets going directly from the shelter into new loving homes, as well as more cats going to NKUT Coalition partners. That’s how Beans’ fate changed, and now he can now look forward to getting a home of his own. 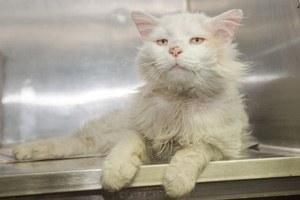 In the past, even a stunning white cat like Beans would have been at risk at Davis County Animal Care and Control — because he’s a senior and because he was sick when he arrived. But with all the new programs in place, the shelter had resources to provide Beans with medical care and a safe place to stay until he could be transferred to a NKUT Coalition group tasked with finding a home for him and for other cats like him.

Allison Stapleton, Best Friends–Utah’s shelter outreach coordinator, says, "It's inspiring to see the coalition members pull together to rescue animals in need from Davis County Animal Care and Control. When an animal's picture and bio are posted using Davis County's Facebook page, the coalition pulls together to offer rescue support, transportation for the animals and foster home resources."

With Davis County’s no-kill efforts gaining more momentum, the future is certainly bright — not only for Beans, but for all the area’s companion animals.

Get involved to save animals