The Best Friends National No More Homeless Pets Conference attracts attendees from Washington state to California to Florida and New York, and everywhere in between. This opens up a world of potential for sharing ideas and helping one another, and at the most recent conference in Jacksonville, Florida, people came together to help one special dog.

A volunteer with Little Friends Foundation (LFF), a No More Homeless Pets Network partner, Rachel was a first-time conference attendee. Rachel’s adoption of Vicktory dog Oscar one year ago from Best Friends gave her a passion for helping dogs in need of a second chance. While at the conference, she planned to network one of the more challenging cases at LFF: a 145-pound black Great Dane and mastiff mix named Emerson, who was on LFF’s “unadoptable” list. 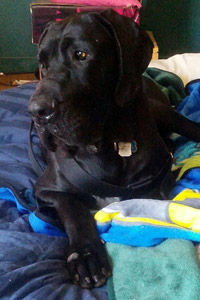 Like many Best Friends Network partners, LFF of Nevada is committed to helping some of the most at-risk pets. They took in Emerson from a local shelter’s “rescue only” list (a list of animals available only to rescue groups and not to the adopting public). It was quickly apparent to the people taking care of Emerson that the large black dog not only had some medical issues, but his lack of socialization and manners, having previously been a “backyard dog,” were his biggest challenges. His skin problems quickly cleared up with proper medication, but Emerson’s reactive behavior to other dogs and selective friendships with people made it extremely hard for him to find a forever home. They thought a sanctuary would be his best, and possibly only, option.

Thinking it was a long shot but worth trying, Rachel posted a notice about Emerson on the conference bulletin board, knowing that representatives from every walk of animal rescue would be there. She hoped to find a Great Dane or large breed rescue group with the resources and expertise to take Emerson. But what she found was even better.

Another conference attendee heard about Rachel’s quest for Emerson and suggested that she speak with Laura Rozler, a large breed enthusiast who was also there. Laura’s heart is as big as her passion for helping dogs in need. She was the volunteer exhibit hall coordinator, having put in six months of hard work prior to the conference. Laura also has a Great Dane named Athena, whom she adopted from Best Friends.

Laura was immediately interested in helping Emerson. She explains, “His story was similar to Athena's, his being a little worse than hers. He was left outside tethered, just like Athena (before she went to Best Friends). He had barrier and people aggression. Both were underweight, extra-large dogs and were hard to place,” shares Laura.

A new beginning in New York

After the conference, Laura went home to western New York and conferred with her partner, and they determined they would give Emerson a chance. Laura drove from Western New York to Nevada to meet Emerson. She spent five days at LFF getting to know Emerson, and then signed the adoption agreement and drove him home to New York.

Emerson was dubbed Zeus by his new family, and he’s doing great. His days are now filled with exploring the family’s 10 acres with his two canine and four kitty siblings. Laura says, “He is doing very well in a home environment despite all he has been through. This big goofy boy loves walks, treats, pets and belly rubs and shows his appreciation with tons of kisses.”

Now Emerson is safe and loved, all because people put in the time to do what they could for him, each one’s part as essential as the next. That’s why in animal rescue the concept of networking is so much more than a buzzword. After all, there’s a wet nose and whiskers behind every request.

Volunteer to help homeless animals in your area. Click here for more information.

Save the date: The 2014 Best Friends National Conference will be held in Las Vegas from October 23 to 26, 2014. Click here to receive updates and more.