Image
Where do animal lovers come from? Everywhere!
By Best Friends Animal Society

Where do animal lovers come from? Everywhere! Best Friends recently welcomed three visitors from three different corners of the globe. All of them are helping animals in their own countries, and came to Best Friends to learn and share on a trip sponsored by Animal People. 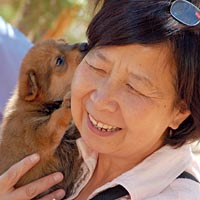 Wu Tianyu and Zhang yu came from China, where they’ve been rescuing, spaying/neutering, and finding new homes for animals since 1988. Their organization, Animal Rescue Beijing, www.arbchina.org has more than 1,000 Chinese members, and now they’re hoping to purchase a building for their own state-of-the-art no-kill shelter. What a boon to the animals of China that will be!

With them was John Carmody of Ireland. He represents Animal Rights Action Network; he organizes their campaigns, works in schools, and educates kids of all ages about the challenges facing animals in today’s world. He seemed like a charming guy who could put on quite a presentation to win folks over to the animal cause. (Animal Rights Action Network can be reached at P.O. Box 722, Kildale, Ireland.) 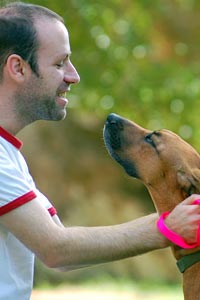 And to complete our mini-trip around the world of animal lovers, Animal People also sent Amina Sarwat Abaza from Egypt. Her organization, SPARE, www.sparealife.org was the first of its kind in Cairo. When she first began rescuing and spaying/neutering animals five years ago, she says people thought it was a very eccentric thing to do and sometimes jeered at her a bit.

Plus, finding adopters wasn’t easy! "People don’t adopt when it’s the same kind of dogs they can find running around on their own street," she said. So Amina offers free spay/neuter to folks willing to take in a dog from their own street. But as for finding homes for her own rescues, she can’t thank Margret Salem enough for taking a lot of them to Germany to find homes there. She calls Margret her "angel," and says it’s been a blessing!

Still, Cairo has come a long way! More organizations like Amina’s are gradually popping up, thanks to the example she’s set. And just recently, she got a call from an Egyptian man she’d never met in her life saying he just wanted to make a donation. That’s progress!

So do have a look at their websites – a good reminder that we’re not alone in our concern for the plight of companion animals. And a big thanks to Animal People for giving us the chance to meet them here at Best Friends, and to offer information and support as they help make the whole world a kinder, gentler place for animals.