Image
Senior arthritic dog was depressed, overweight and in pain until hydrotherapy and a foster home helped her feel better and (ultimately) find a home.
By Nicole Hamilton

Kelly calls the snoring of her dog Suki “the most beautiful sound in the world,” and she’ll gladly pause Netflix as the large adopted senior first tries to curl her entire 75-pound body up on Kelly’s lap, but then settles for resting her head there instead.

Kelly loves everything about Suki, who she adopted from the Best Friends Lifesaving Center in New York City — especially the way Suki shows her that there’s always a reason to look ahead with hope.

Kelly wasn’t sure she could open her heart to a pet again after losing her beloved cat, Riley. But then she learned that Suki, despite being homeless while living in an achy, arthritic body, still managed to have hope that things would get better — hope that is consistently evident through wags of her tail.

Love and healing in a foster home

Suki’s journey to life with Kelly began when she was surrendered to Animal Care Centers of NYC. She was in pain due to arthritic joints, and it didn’t help that she was also overweight.

The center’s dogs are brought over from ACC, so they can have as much time as they need to get adopted. In Suki’s case, she’d also receive ongoing support from the medical team shedding pounds and controlling her arthritis.

The staff kept a close eye on her and made sure she got plenty of exercise in the form of walks and playtime to lose weight, build muscle and gain joint mobility. But no matter how hard they tried, Suki showed little interest in engaging with people or other dogs.

Kirstin Burdett, community programs and events manager for Best Friends in New York, was concerned that Suki’s depression was keeping her from finding the thing she needed the most — a home. So she and her boyfriend, Kevin, stepped up to give her the next best thing, a foster home. There, Suki could have all the room she needed to relax, as well as the extra attention to help her lose weight and get healthy. 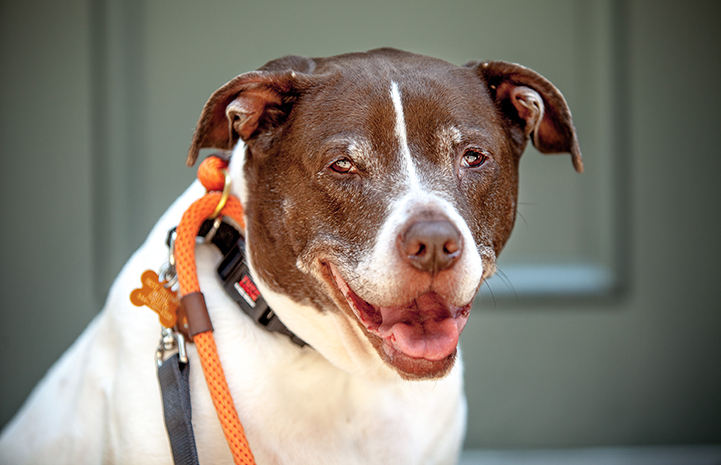 Hydrotherapy for an arthritic dog

Suki perked up right away. “She loved the car ride home,” says Kirstin. She and Kevin have a room in their apartment, reserved for the animals they foster. That’s where Suki first stayed to get acclimated to her new temporary home.

Slowly, she came out of her shell enough to let Kirstin and Kevin take her for walks. “It took a lot of work at first,” says Kirstin. “She didn’t have great muscle tone and so we carried her in a sling.”

With every walk, though, Suki grew stronger and started losing weight. But weekly hydrotherapy sessions at a nearby facility are what really made her begin to feel better, and it showed.

“She did exercises to help her build muscle, like walking on the water treadmill and swimming,” says Kirstin. “Eventually she began running in spurts. And that’s when we realized that her arthritis was no longer impacting her happiness and it was time to find her a home.” 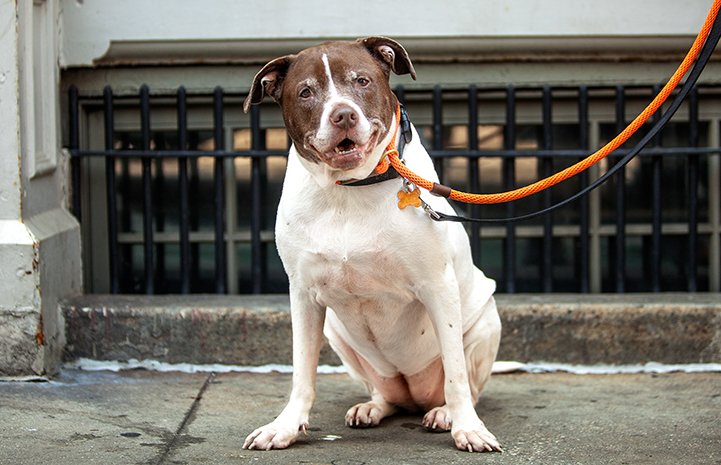 Finding a new home for Suki

Kirstin made flip books full of photos of Suki in her foster home. “We brought her everywhere we thought families would gather, including alumni football games (and center adoption events) in hopes that her path would cross with a potential adopter's,” says Kirstin.

A few weeks went by and then, on the last day of a Thanksgiving weekend adoption event, Kelly walked in. Too heartbroken after losing Riley to look at cats, she set her sights on adopting a dog.

As her eyes met Suki’s, she was thinking that she’d probably found her dog, because this wasn’t the first time she’d seen Suki. She’d been following her on the Best Friends in New York Instagram page.

“I recognized her in the lobby right away, but played it cool and took my time,” says Kelly. “I walked through the dog area. Then, I sat down with Kevin, Kirstin and Suki, and I spent a lot of time asking questions and trying not to get anyone's hopes up, since I wasn't sure I was ready yet.” 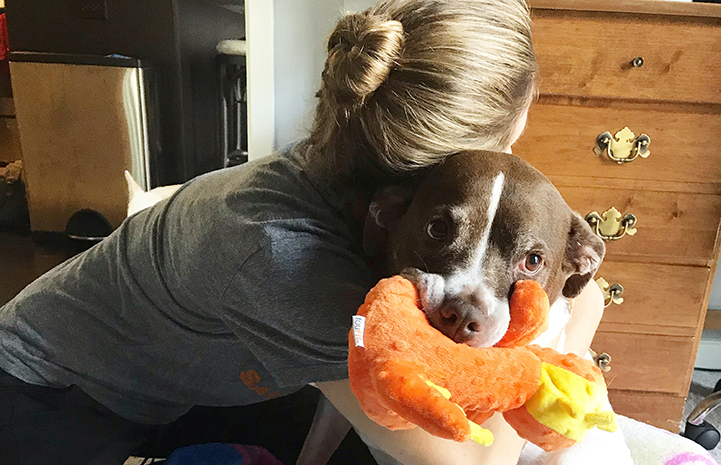 Missed connection with a dog

The more time that Kelly sat with Suki, the more she was convinced she wanted to adopt the senior dog. Still, this was a big decision, so she left to think about it and told Kirstin and Kevin she’d be back later after making up her mind.

When the event ended with no sign of Kelly, the couple and Suki packed up their things and headed home. They had gone about two blocks when they got a call from the center. Kelly had returned, so they turned around. Hopefully, this was the person Suki had worked so hard to find.

“When I saw that Suki and her foster family weren't in the lobby, my heart dropped,” says Kelly. “If I was 75 percent sure about adopting on the walk back, I was 99 percent sure when I saw they weren't there.”

After a little more time visiting with Kirstin and Kevin, Kelly upped the percentage to a solid 100. And with that, she and Suki hopped into Kirstin’s car and got a ride home. 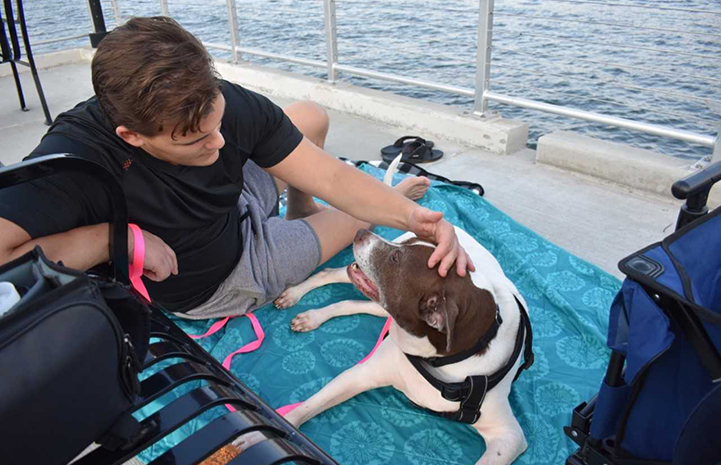 Comfort and joy for a dog and her adopter

Now, Kelly keeps Suki on her exercise regimen and helps manage her arthritis with medication and supplements. "Suki’s behavior and temperament are really a perfect fit for my life,” says Kelly.

At a recent water therapy session, Suki's physical therapists said they’ve never seen the dog so relaxed. Suki has also made friends with older dogs in her apartment building, and her very favorite friend is the super, who she looks for on every walk.

“Riley was my little soul mate, but Suki is my (big) little lifesaver,” says Kelly. “A lot of people have said I'm special for adopting an older dog, particularly one who needs medications for her arthritis. But to me, Suki's always been my dog. It just took us a little while to be ready for each other.” 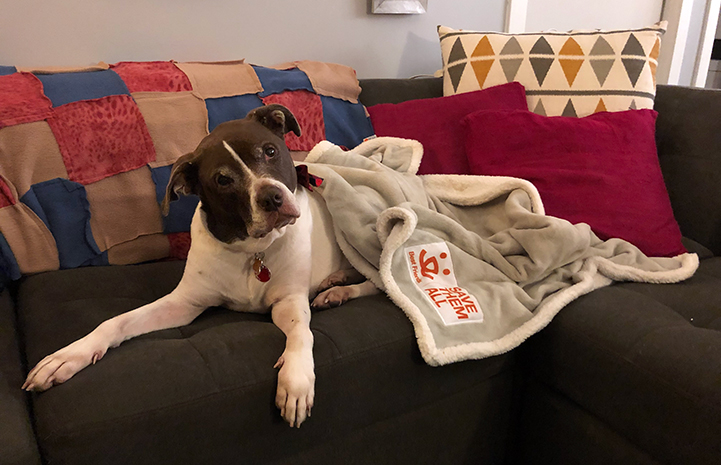