Image
Cat was a stray in a stressful environment, so she was understandably frightened and distrustful, but she's made great progress.
By Christelle L. Del Prete

Britney lived in a city where cats were being hit by cars and shooed away by residents who did not want them around. After spending the first six years of her life in fight or flight mode in this stressful environment, the petite, gray-striped cat did not have a very high opinion of people.

When Britney arrived at Best Friends Animal Sanctuary last February, she ran up to the rafters and decided she wanted to stay there. Caregivers gave her space, providing a cozy tote, food, water and a litter box on her lofty perch. For some time, Britney was just too scared of people to bother with them. If she ever wanted to come down from her perch, she would wait until everyone left for the day before climbing down.

Comforting a cat in a storm 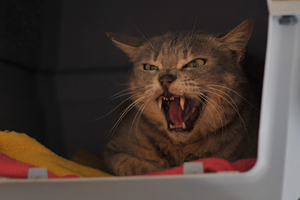 Whenever caregivers climbed a ladder to check on her, Britney made it clear she didn’t want them up there. Her ears would go back, and her eyes would get wide. If that didn’t make the person go away, she would give a short, warning hiss, and then lunge and strike at the unwelcome guest.

Then one day there was a severe storm — with loud, sharp cracks of thunder and dazzling but dangerous lightning bolts. This scared Britney more than anything had ever scared her before. Realizing that she needed her caregivers, she let them approach her slowly, talking softly. There was no way she was going to let herself be petted even as the storm raged on, but she seemed to feel safer with someone soothing her.

After the storm, Britney didn’t forget how people had calmed and comforted her, and she stopped hissing at them. Eventually, she ventured down from the rafters and began spending some time on the ground, even when people were there. Though at first she stayed on the fringes of the room watching the activity warily, she soon joined a group of cats milling around their caregivers' feet at feeding times.

During one of these times, while Britney was focused on her forthcoming meal, she felt something strange. It was a hand, gently stroking her back. Caregiver Drake Fullerton decided to go for it and reached down to pet Britney’s soft gray fur. To Britney’s surprise, it felt good, so she let Drake pet her more and more. And, since letting one person touch her wasn’t so bad, Britney began to let others do the same.

No longer frightened or defensive 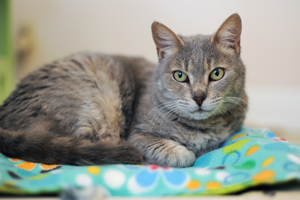 These days, Britney has put her past behind her. Now instead of hiding in the rafters, she winds herself around people’s legs, hoping to be petted. “If her tail is kinked over her back, she’d like some pets,” said Cat World caregiver Janet Wilde, as Britney rubbed against her legs, purring. If being petted on the ground isn’t enough, Britney will take things one step further and jump into volunteers’ laps.

Though Britney still calls the shots as far as when she wants attention and when she’d like some time alone, she’s come a long way from the frightened and defensive cat she once was. She only needed patience and understanding to get used to being around people, and realize they were there not to harm her but to help her. Now her transformation into a loving, happy cat is complete.

To bring hope and healing to more animals like Britney, become a Best Friends member.