Image
Orphaned mystery fledgling (the species of bird he is was at first unclear) comes to the Sanctuary. He turns out to be a horned lark. Read his story.
By Sharon St. Joan 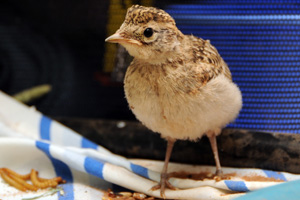 If it weren’t for the insistent peep-peep coming from inside the closed cardboard box, the little orphaned bird might have gone unnoticed. How he came to be picked up out of the wild and plopped into a box is anyone’s guess, but when the Best Friends staff first met him, it was clear he’d been separated from his family and would need help getting back to them.

The first items of business were getting him into a spot more comfortable than his cardboard box, and then getting him some food. He would be joining a menagerie of other orphaned animals at Wild Friends (the wildlife area at Best Friends Animal Sanctuary), where state and federally licensed wildlife rehabilitators already had several other charges in their care.

Eventually they’d have to figure out exactly what kind of bird he was, because tiny balls of downy fluff can be difficult to identify. But that would come with time.

The good news was that the little bird wasn’t injured. He was put into a roomy enclosure with soft net sides and given a timothy grass bungalow, which is a wonderful kind of wildlife shelter made out of woven grass that provides a good approximation of a natural shelter.

That first day in the Wild Friends clinic, the little bird was placed next to an enclosure full of robins, phoebes, tanagers, house finches and house sparrows. Injured or orphaned birds of all shapes, sizes and species make their way to Wild Friends, where they get the time and care needed to heal so they can be released again.

While the little orphan wasn’t the same species as any of the other current Wild Friends residents, it wasn’t immediately clear what kind of bird he was. But staff soon saw that the little bird enjoyed eating insects, and within two weeks was flapping his wings energetically and beginning to fly. His behavior gave staff clues to the fluffy little bird’s identity.

The Wild Friends staff gave him a variety of objects, including several kinds of perches. He didn’t use any of them, but he did enjoy standing on top of his bungalow. He had long legs and a puffy body, and looked a little bit like a shorebird.

Identifying fledgling as a horned lark

Eventually the little one was positively identified as a horned lark. Horned larks live in sagebrush on the ground and, therefore, do not perch like songbirds. As he grew into a fully feathered, brown and white fledgling, it was evident that, yes, he really was a horned lark.

Once he got better at flying, the little bird graduated to the enclosure with other baby birds, like  western tanagers and Say’s phoebes. Soon they’d all be able to go back where they were meant to be — in the wild.

Releasing bird back to the wild 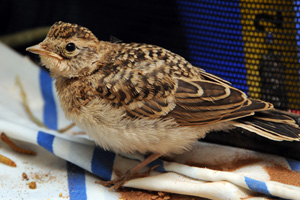 A few weeks later the little horned lark, all ready to go, was released on the flat sagebrush land not far from the Sanctuary. It’s a popular habitat for horned larks, so he’ll be able to make lots of new friends. He flew straight out, and then dropped down into his new sagebrush home.

The young robins and phoebes were released in an area with tall pecan and cottonwood trees, perfect for perching, with a lovely lawn below. The house finches and house sparrows were released right near Wild Friends, so they’ll be able to return for food in the coming days, while they get used to their new freedom.