Image
Information about Oscar the Vicktory dog, who was rescued from Michael Vick's fighting bust, from adopter Rachel.
By Best Friends staff

More about Oscar from adopter Rachel:

What has surprised you most about Oscar?

He will stand outside, in the pouring rain, and "shout" at the thunder. We get these massive thunderstorms in the late summer, which he hates. But instead of coming inside and hiding, he runs out, watches the sky, waiting for the thunder, and then barks at it.

His tail-wags; they are magic. When you see his tail wag, you know that he is happy, and that makes me happy. All I want for him is to feel happy, safe and loved. 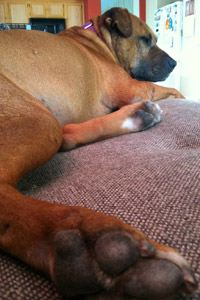 ​Chillaxing ... No, really. He is a couch potato. I remember the first morning I found him on the couch. He'd been home with me for a few weeks, at most, and he had a party overnight. There were toys everywhere, as well as a few books he'd snagged from the bookcase. He was on the couch, with a pair of my flip-flops, just looking at me with a look that said, "This couch thing is pretty cool." He'd never had a couch before.

Oscar has changed my life. I didn't set out to adopt a Vicktory dog. I just wanted a pit bull.

With him, I didn't just adopt a dog; I got a whole new family. The majority of the Vicktory adopters keep in close contact, and they are awesome. We swap stories, share advice, and support each other.

What do you think people can learn from Oscar?

Acceptance. Forgiveness. Unconditional love. I think there is an important distinction to make: These are not fighting dogs; they are dogs who were forced to fight. They had to fight or die.

Humans do unimaginably cruel things to dogs. Oscar and the other dogs rescued from Bad Newz Kennels don't hold that against the rest of us. All you have to do is look at how well the dogs have done in the five years since they were rescued. Look how many have found forever homes.

Sure, they may be frightened, cautious, and slow to trust, but at the end of the day, all they want is to be loved and to love in return.