Image
One student's visit to Best Friends Animal Sanctuary helps change his mind about pit bulls and correct negative stereotypes about the breed.
By Jennifer Hayes

Back home in South Africa, Sabelo Phokanoka had a bad experience with one of his brother’s dogs. Since then, he had been fearful of pit bull terriers. However, that all changed once he met Bruno at Best Friends.

A student of Verde Valley School, an international boarding and high school in Sedona, Arizona, Sabelo participated in their immersion experience. Every year, students are broken into smaller groups to travel for two weeks, performing community service and environmental stewardship. His group of 10 students and two faculty must have hit the jackpot: They got to help out at the Sanctuary.

Not knowing what to expect, math and science faculty member David Smeeth only scheduled two and a half days at Best Friends. After training and orientation, the students completed some trail repairs, cleared a goat enclosure fence line, did some maintenance at Dogtown, and learned about Best Friends’ initiatives.

“They learned how significant the unwanted-animal problem is, and that there’s a whole lot you can do about it,” says David. “We reiterated the value of hard work and service, and a lot of them expressed their pleasure at being able to participate and give to (Best Friends).” 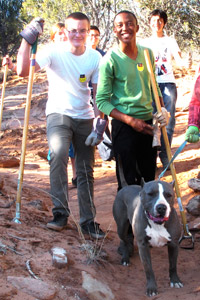 But the most notable instructor at the Sanctuary might have been pit bull terrier Bruno, acting as an ambassador for his breed. Most of the students gravitated toward Bruno, fawning over the friendly pooch. However, based on his experience years ago, Sabelo held back.

“I didn’t want anything to do with pit bulls,” says Sabelo. “That was the one thing I didn’t want to come across.” That’s when Wendy Gallant, Best Friends’ group coordinator for the Learning Experience, explained the unwarranted stereotypes surrounding pit bull terriers, not only in America, but worldwide. She encouraged Sabelo to sit next to Bruno and pet him. That’s when the magic happened.

“Then he started licking my hand, which was really nice,” says Sabelo, who experienced a complete change of heart.

Each night, the group met to discuss their day, and all Sabelo could talk about was Bruno. And on their last day at the Sanctuary, as they worked, the group saw someone walking Bruno on a trail. Everyone called out to their new canine friend. When he turned around, “It was like saying goodbye to Best Friends through Bruno,” Sabelo recalls.

Sabelo has kept Bruno’s spirit in his heart. In fact, he has made a complete 180 from his earlier feelings about pit bull terriers; now he speaks out on their behalf. Back at school, one of the teachers recently adopted a pit bull terrier. When some of Sabelo’s fellow students expressed fear of the dog, he shared what he learned at Best Friends. Now everyone enjoys the dog’s company.

And prior to Sabelo’s visit, he thought the only place to get an animal was to purchase one at a pet store. Now when people talk to Sabelo about getting a pet, he always promotes adoption.

Sabelo certainly won’t be the last Verde Valley School animal advocate. David says the Sanctuary “was the high point of the trip” and plans to stay longer next year by finishing their two-week immersion experience at Best Friends, saving the best for last.